SRINAGAR (92 News) – The 2nd martyrdom anniversary of the prominent Kashmiri youth leader, Burhan Muzaffar Wani will be observed on both sides of LoC today (on Sunday) with a renewed pledge to continue struggle for accomplishment of martyrs mission. The day dawned with special prayers for the early liberation of Jammu and Kashmir from illegal Indian occupation. The rallies have been arranged across AJK to observe the martyrdom anniversary of Burhan Muzaffar Wani. Main rally of the day will be taken out in Muzaffarabad today. The rally will turn into a public gathering at Burhan Muzaffar Wani Chowk. AJK Prime Minister Raja Farooq Haider Khan will address the public gathering. Azad Kashmir Radio Mirpur is airing special programs in connection with the death anniversary of Burhan Muzzafar Wani. Call for the observance of the day has been given by the Joint Resistance Leadership comprising Syed Ali Gilani, Mirwaiz Umar Farooq and Muhammad Yasin Malik. The Hurriyat leadership has also asked the people to observe complete shutdown and march towards Tral town, the native area of Burhan Wani, where a public meeting will be held to pay tributes to him and other martyrs of the 2016 mass uprising triggered by his extrajudicial killing. Burhan Wani was killed along with his two associates by the Indian troops in a fake encounter in Kokernag area of Islamabad district on 8th July in 2016. AJK PM urges int'l community to stop gross HR violation in Kashmir 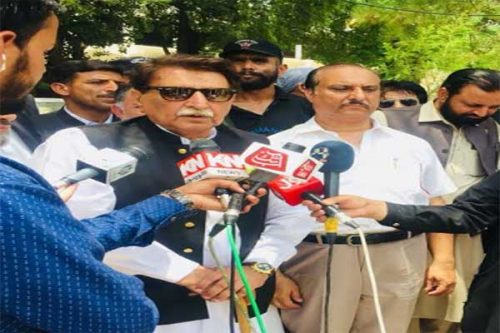 Addressing a rally at D-Chowk in Islamabad today, Azad Jammu and Kashmir Prime Minister Raja Farooq Haider India has been committing the human rights violations in held Kashmir and international community should break its silence on these injustices. He said that Burhan Muzaffar Wani's martyrdom provides an ample spirit to the freedom movement of innocent Kashmiri people. He said Hurriyet leader Asiya Andrabi is the voice of voiceless people and the occupation forces once again violated the UN resolutions by shifting her to New Delhi. The AJK PM warned Indian government to free her immediately otherwise Modi will be responsible for the situation. Haider said Pakistan is our advocate and we hope that international community will pay attention to the long standing issue of held territory.