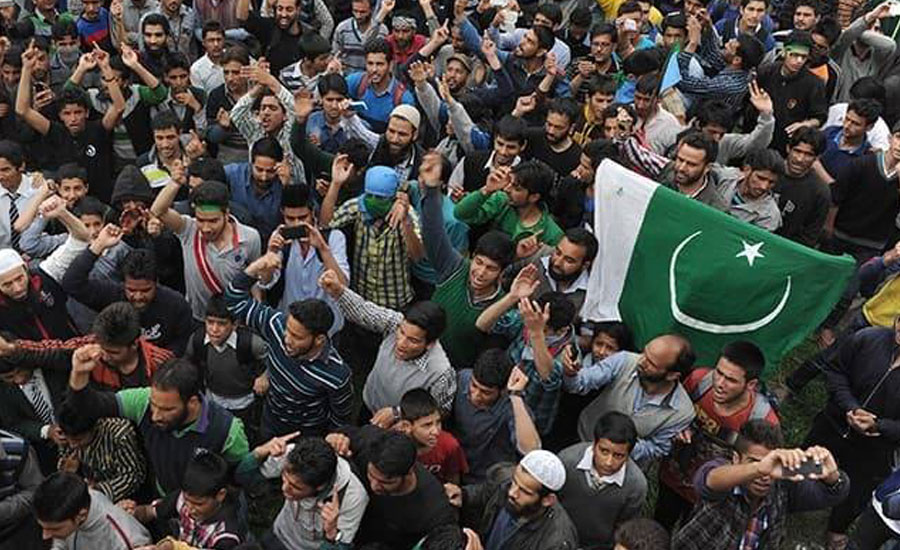 MUZAFFARABAD/SRINAGAR (KMS) – Kashmiris on both sides of the Line of Control and across the world observed the Accession to Pakistan Day on Friday, with a renewed pledge to continue the struggle for freedom from Indian occupation and complete merger of Jammu and Kashmir with Pakistan. It was on this day in 1947 when genuine representatives of majority of Kashmiris unanimously passed the resolution of Kashmir’s Accession to Pakistan during a meeting of the All Jammu and Kashmir Muslim Conference at the residence of Sardar Muhammad Ibrahim Khan in Aabi Guzar area of Srinagar. The historic resolution called for the Accession of the State of Jammu and Kashmir to Pakistan in view of its existing religious, geographical, cultural and economic proximity to Pakistan and aspirations of millions of Kashmiri Muslims. Tehreek-e-Wahdat-e-Islami, a constituent of APHC, in an extraordinary meeting of its general council held in Srinagar in connection with the Accession to Pakistan Day, said that the final destination of the Kashmiris’ ongoing freedom movement is the merger of Jammu and Kashmir with Pakistan. Muslim Conference Chairman Shabbir Ahmed Dar, in a statement in Srinagar, said that the Kashmiris’ resistance to the Indian occupation would continue till the resolution adopted by their genuine leaders is implemented in letter and spirit. Speakers at a roundtable conference organized by the All Parties Hurriyat Conference Azad Jammu and Kashmir chapter at its office in Islamabad in connection with the Accession to Pakistan Day, termed 19th July as an important day in the history of Kashmir when the Kashmiri people had attached their future with Pakistan in 1947. Rallies and conferences were held in Muzaffarabad, Mirpur and other parts of Azad Jammu and Kashmir, reaffirming the Kashmiris’ resolve to continue struggle till the goal set in the 19th July resolution was achieved. A Muslim trader, Ghulam Rasool Wani, who was missing from Udhampur area of Jammu region since 12th July, was found dead. Earlier, a complete shutdown, marked by demonstrations, was observed in his native Banihal town against his disappearance. An Indian policeman and Personal Security Officer of pro-India Peoples Democratic Party leader, Sajad Mufti was shot dead by unidentified gunmen at Baba Mohalla in Bijbehara area of Islamabad district, today. Soon after the incident, Indian police and troops launched a search operation to nab the attackers. The troops also started a similar operation in Seer Hamdan area of the district. A senior government official told media that his father died in New Delhi but the Indian police personnel did not allow him to take the dead body to Srinagar on the pretext of ban on civilian traffic movement on Srinagar-Jammu highway during the ongoing Amarnath Yatra. In New Delhi, India’s notorious National Investigation Agency is quizzing Haji Mohammad Hayat Butt, the owner-cum-editor of a Srinagar-based English daily Kashmir Reader for the past few days in connection with articles published in the newspaper following the martyrdom of popular youth leader, Burhan Muzaffar Wani.