Kasur scandal: No hurdle will be tolerated in the provision of justice, says CM Punjab Shahbaz Sharif

Kasur scandal: No hurdle will be tolerated in the provision of justice, says CM Punjab Shahbaz Sharif

LAHORE (92 News) – Chief Minister of Punjab Shahbaz Sharif has on Sunday met with the Kasur child abuse victims and vowed to ensure justice to them after the victims refused to take part in Joint Investigation Team’s proceedings. Despite going to Kasur, The CM called on the victims and their families in Lahore. Punjab Chief Minister Muhammad Shahbaz Sharif announced to immediately withdraw the cases registered against the protestors and directed IG Police to take necessary legal action in this regard. Shehbaz Sharif said that the Kasur incident was painful and assured that justice will be provided to the victims. He said that no hurdle will be tolerated in the provision of justice and stern action will be taken against anyone trying to hinder this process. The lawyer of the victims and the affectees announced to end their boycott of the JIT and said that they will participate in the investigation of JIT. 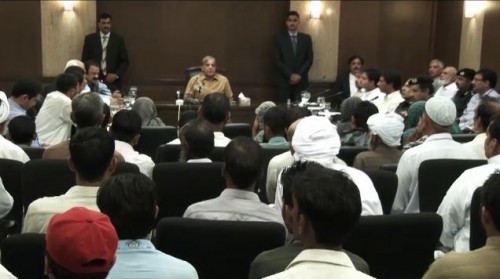