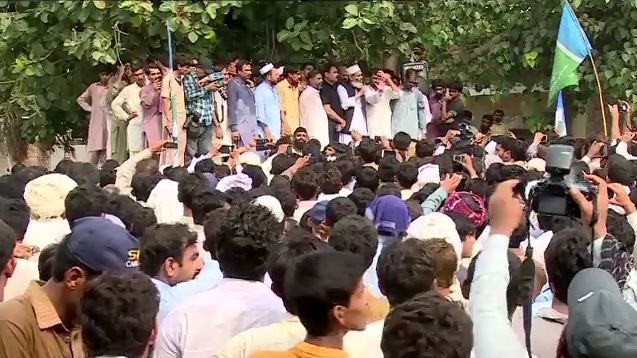 KASUR (92 News) – Political leaders from different parties including Punjab opposition leader Mehmoodur Rasheed, and JUI chief Sirajul Haq have met the families of the victims of child abuse and assured their support for the justice on Sunday. Talking to media after meeting the child abuse victim families in Kasur, Punjab Assembly opposition leader Mian Mehmoodur Rasheed accused the police of trying to ignore the issue by relating the issue with the property, adding that false cases are being made against the protesters. Mian Mehmoodur Rashid said that the Kasur tragedy is a slap on the face of good governance and announced to protest in and outside the Assembly until the arrest of the accused. On the other hand, Jamiat Ulema Islam chief Sirjul Haq reached Kasur to express sadness with the families of child abuse victims. He said that this is the worst incident in the history of the world, adding that they will protest if the accused should not be brought to logical conclusion. He demanded the Chief Justice of Pakistan to take suo moto notice of the incident. Meanwhile, Jahan Ara Wattoo, daughter of Pakistan People’s Party leader Mian Manzoor Wattoo, declared the child abuse incident worst. She said that the incident defamed the Pakistan in the world, adding that Punjab Law Minister Rana Sanaullah should resign.