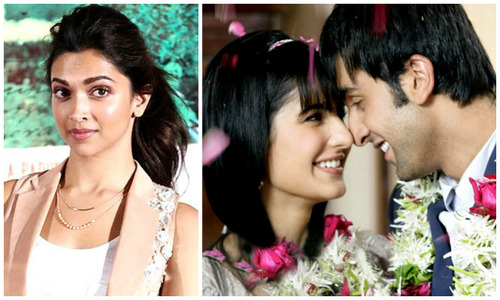 Mumbai (Web Desk) Bollywood actress Katrina Kaif, who was busy shooting for her upcoming movie ‘Fitoor’ in Mumbai, spent Valentine’s Day with her beau Ranbir Kapoor in New Delhi. Ranbir was busy shooting for Imtiaz Ali’s ‘Tamasha’ in capital with former girlfriend Deepika Padukone. Katrina returned to Mumbai a few days ago from Delhi, where she was shooting for Abhishek Kapoor’s ‘Fitoor’, she flew back to the capital, just so she and beau Ranbir could spend the special day together. But, we hear pictures of Ranbir Kapoor bringing flowers to ex-turned-friend Deepika Padukone on the sets of ‘Tamasha’ have been doing the rounds. But, before you get excited, let’s just clarify that the former lovers were shooting a scene for the upcoming film.