Keith Richards documents rock roots in 'Under the Influence' 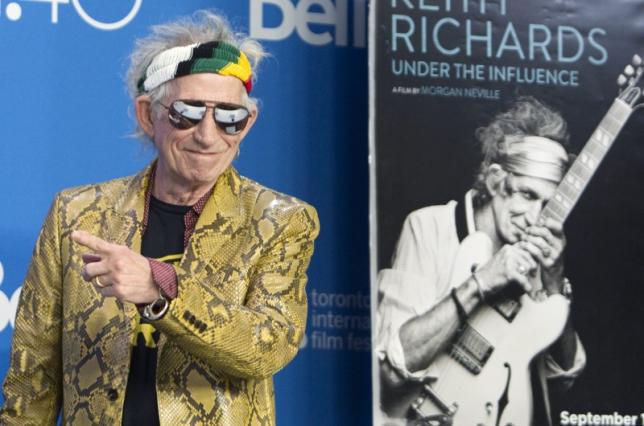 Keith Richards documents rock roots in 'Under the Influence'

TORONTO - A new film about Keith Richards unexpectedly evolved from the story of making his latest solo album into a study of the huge influence of blues, country and even reggae on his music, the renowned Rolling Stones guitarist said. The documentary "Keith Richards: Under the Influence," had its world premiere at the Toronto International Film Festival on Thursday ahead of its release on Netflix Sept. 18. The movie was originally meant to document the making of "Crosseyed Heart," his first solo album in more than 20 years. But under director Morgan Neville, who won an Oscar for "20 Feet from Stardom," the focus shifted to where his music comes from. "There was no plan on this. At the same time, during the making of it, at least halfway through, I realized that that was what was happening," Richards told Reuters ahead of the premiere. Richards, 71, said both the film and making the album, which features rock, reggae and country songs, gave him a new appreciation of his influences, including less obvious ones such as the role of his music-loving mother. Growing up in post-war Britain, Richards said his home was filled the music of Billie Holiday, Louis Armstrong, Duke Ellington and Ella Fitzgerald. "It was all good stuff. In other words if you're growing up at 4 years old and you can sing Billie Holiday songs, you realize that 'ya, brought up on the blues without even knowing it,'" he said. He went on to worship musicians like Muddy Waters, an interest that bonded him with former classmate Mick Jagger. "Under the Influence" explores how once the Rolling Stones because famous they helped reignite interest in American blues. Richards said when the band first came to America, they found it "astounding" blues wasn't better known. "We hadn't realized until we got here how white kids just didn't go down the other end of the dial where, to us, it was like treasure troves," he said. The release of the film and Richards' solo album came the same week he revealed the Rolling Stones plan to return to the recording studio next year. "I saw all the boys in London last week and they're ready to get in a studio at the first given opportunity, which is even more than I hoped for," he said. Richards said the band had been reinvigorated by its most recent U.S. tour, where it deliberately focused on smaller cities it first played in 1960s and 70s. "This is the thing with the Stones. You keep thinking 'Come on, how long can you keep this thing going?' But I guess the answer is until we don't feel that we're improving," he said. "To me, and I think to everybody else in the Stones, the last tour was probably, musically speaking, the best so far. So there's always that feeling of something more to come. Some anticipation. The energy is there." -Reuters