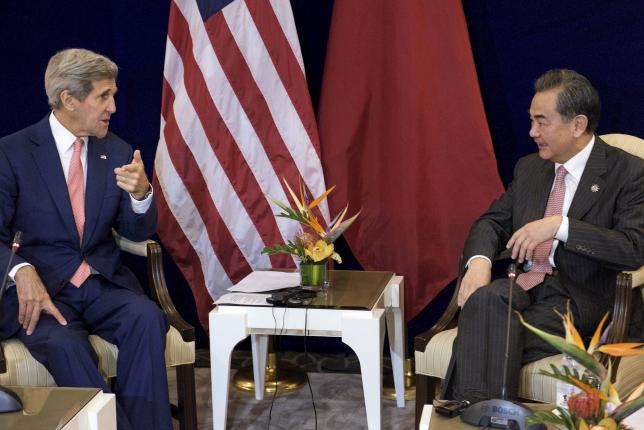 KUALA LUMPUR - Tensions in the disputed South China Sea took centre-stage in talks between U.S. Secretary of State John Kerry and Chinese Foreign Minister Wang Yi on Wednesday, a day after Southeast Asian nations called for restraint in the vital waterway. Kerry told reporters ahead of his meeting with Wang in Kuala Lumpur that he would discuss Washington's call for a halt to activities in the South China Sea that are causing concerns around the region. Washington has criticised China over its land reclamation and rapid creation of seven artificial islands in the Spratly archipelago on the South China Sea. Kerry later told his counterparts from the 10-member Association of South East Asian Nations (ASEAN) that he had a "good meeting" with Wang, although he gave few details about the talks. "We want to ensure the security of critical sea lanes and fishing grounds and to see that disputes in the area are managed peacefully and on the basis of international law," Kerry said in opening remarks to the ASEAN foreign ministers. "I hope very much that at this meeting over the course of today and tomorrow we will find a way to move forward, effectively, together, all of us," Kerry added. In brief remarks to reporters after his talks with Kerry, Wang said China would pursue "peaceful discussions" to resolve the South China Sea dispute. He did not elaborate. Wang on Monday described calls for a freeze in activity in the South China Sea as "unrealistic". China had also said it didn't want the dispute raised at this week's ASEAN meetings, but some Southeast Asian ministers including from host Malaysia rebuffed that call, saying on Tuesday that the issue was too important to ignore. China claims most of the South China Sea, through which $5 trillion in ship-borne trade passes every year. The Philippines, Vietnam, Malaysia, Taiwan and Brunei have overlapping claims. Malaysian Foreign Minister Anifah Aman said ASEAN member nations agreed that "exercising self-restraint in the conduct of activities that would complicate or escalate tension must be enhanced" in the South China Sea. China has shown no sign of halting its construction of artificial islands in disputed areas. It has also accused the United States of militarising the South China Sea by staging patrols and joint military drills. -Reuters