Kerry to lay out vision for Israeli-Palestinian peace 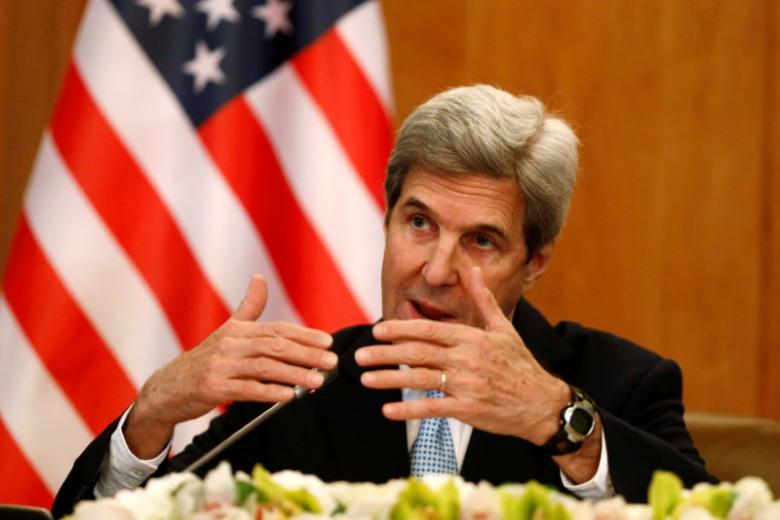 Kerry to lay out vision for Israeli-Palestinian peace

WASHINGTON - US Secretary of State John Kerry will lay out his vision for ending the Israeli-Palestinian conflict in a speech on Wednesday, days after the United States cleared the way for a UN resolution demanding an end to Israeli settlements. The speech, less than a month before President Barack Obama leaves office, is expected to be the administration's last word on a decades-old dispute that Kerry had hoped to resolve during his four years as America's top diplomat. It could also be seen in Israel as another parting shot at Israeli Prime Minister Benjamin Netanyahu, who has had an especially acrimonious relationship with Obama since they both took office in 2009. The United States on Friday broke with a longstanding approach of diplomatically shielding Israel and abstained on a United Nations Security Council resolution that passed with 14 countries in favour and none against. Kerry will discuss the abstention when he speaks at the State Department at 11am ET (1600 GMT), a senior State Department official told reporters. "We believe that with the two-state solution in peril, it is important to share the deeper understanding we have developed of both sides' bottom lines during intensive consultations in recent years," the official said. The speech will also address what the official called "misleading" accusations by Israeli officials that the Obama administration drafted and forced the resolution to a vote. Undeterred by the UN resolution, Israel's Jerusalem municipality is due to consider on Wednesday requests for construction permits for hundreds of new homes for Israelis in areas captured in 1967 and annexed to the city. 'SHAMEFUL' DECISION, ISRAEL SAYS Israeli officials described the abstention as a "shameful" decision. President-elect Donald Trump, who urged the White House to veto the resolution, chided the world body as "just a club for people to get together, talk and have a good time." State Department spokesman Mark Toner on Tuesday said the United States hoped the UN vote would serve as a "wake-up call" that settlements are a detriment to a two-state solution. Israel for decades has pursued a policy of building Jewish settlements on territory it captured in a 1967 war with its Arab neighbours, including the West Bank and East Jerusalem. Most countries view the settlements as an obstacle to peace. Israel disagrees, citing a biblical, historical and political connection to the land, as well as security interests. Washington considers the settlement activity illegitimate. Since learning last week of Kerry's planned speech, Israeli officials have been concerned he might use the address to lay out parameters for a Middle East peace deal. Netanyahu's aides are confident the Trump administration will likely ignore any Obama principles and pay no heed to the UN resolution, but they fear Kerry's remarks will put Israel on the defensive and prompt other countries to apply pressure. Kerry previously failed to bring about a diplomatic resolution to the conflict in talks that froze in 2014. US officials left little doubt they put much of the blame on Netanyahu's stance on settlements. Some 570,000 Israelis live in the West Bank and East Jerusalem among more than 2.6 million Palestinians. -Reuters