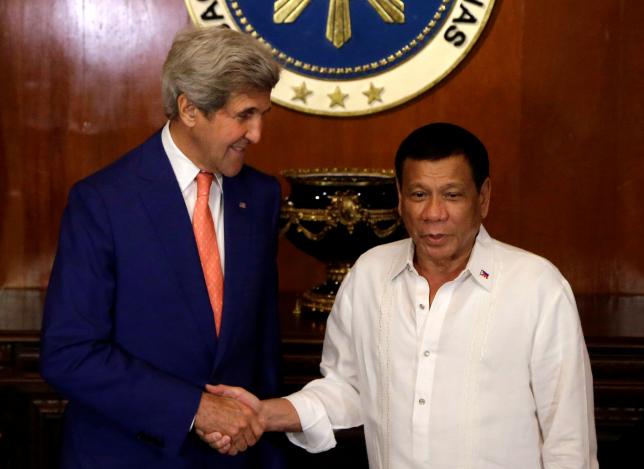 MANILA - US Secretary of State John Kerry meets Philippine's President Rodrigo Duterte in Manila on Wednesday to discuss his new government's priorities as well as possible dialogue with China on resolving tensions over the South China Sea. Kerry is the highest-ranking US official to visit the Philippines since Duterte's election victory in May and follows a meeting of foreign ministers from Southeast Asian nations in Laos this week. "We are going to hear about (Duterte's) priorities, we're going to get to know him," a US official said ahead of the meeting. "We're going to discuss how we can work together and where we want to focus." Duterte will host Kerry at the presidential palace for a working lunch, a gesture the US official called "unprecedented and a signal of the importance the new president places on the relationship and the alliance" with the United States. Kerry said on Tuesday he supported the resumption of talks between China and the Philippines over the South China Sea following an international court ruling against Beijing over the dispute earlier this month. China has refused to accept the July 12 ruling by the Permanent Court of Arbitration, based in The Hague, in which Manila won an emphatic legal victory. During the meeting in Vientiane, China's Foreign Minister Wang Yi asked Kerry to lend his support for bilateral talks to restart between Manila and Beijing. "I expect the conversation to include more exploration on the question of what a constructive, positive and peaceful and lawful path forward looks like," the US official said, adding that the Philippines had behaved with restraint since the court ruling. The official said Kerry would also raise US concerns over "an unhappy history" in the Philippines of extra-judicial killings and violence against journalists. "We hope to learn more from President Duterte about his thinking in connection with protecting human rights, civil rights, and maintaining the rule of law in law enforcement," the official added. Duterte's incendiary rhetoric and advocacy of extrajudicial killings to stamp out crime has prompted alarm among the international community, including in the United States. Increased military cooperation between the two countries could also come up during the meeting, the official said. The Philippines is one of the oldest US allies in Asia, and hosted permanent US military bases until 1992. That deal ended after Philippine lawmakers voted to evict US troops in 1991. However, US Defense Secretary Ash Carter recently announced that US troops and military equipment would be sent on regular rotations in the Philippines and that the two countries had started joint patrols in the South China Sea. -Reuters