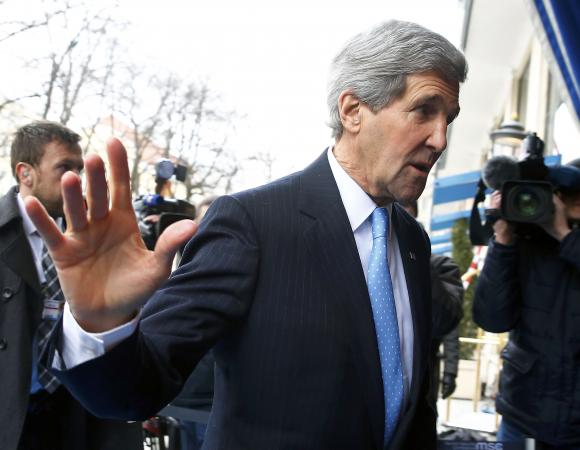 (Reuters) - U.S. Secretary of State John Kerry met with Iranian Foreign Minister Mohammad Javad Zarif for more than an hour on Friday to discuss developments in nuclear negotiations between Tehran and major world powers, which have been at an impasse for months. "Their meeting was focused on the ongoing nuclear negotiations and they discussed the recent meetings of the P5+1 (six world powers)," a senior U.S. State Department official said on condition of anonymity. "Secretary Kerry also reiterated our desire to move toward a political framework by the end of March," the official added. "They agreed to stay in close touch and that they would try to meet again soon." The meeting, which included senior European Union official Helga Schmid, took place on the sidelines of the annual Munich Security Conference. Kerry and Zarif have met repeatedly in recent months in an attempt to break the deadlock in the nuclear negotiations. Zarif is also expected to meet France's and Russia's foreign ministers in Munich. In response to the State Department statement, a source in Israeli Prime Minister Benjamin Netanyahu's office warned there may soon be "a dangerous deal enabling Iran to produce nuclear weapons that would threaten the survival of Israel." "Prime Minister Netanyahu believes it is his obligation to speak out about this grave threat to the Jewish state while there is still time to stop a bad deal," the source said on condition of anonymity. Republicans invited Netanyahu to address U.S. Congress in March, an invitation that President Barack Obama's Democrats have criticized. Iran and the United States, Britain, France, Germany, Russia and China have set themselves a March deadline to reach a political agreement ahead of a final nuclear deal by June 30. The agreement would be on limiting Iran's nuclear program in exchange for lifting sanctions. Iran and the six have twice extended the negotiations after failing to meet previous deadlines for a deal. Tehran rejects allegations by Western powers and their allies that it is developing the capability to produce atomic weapons. But it has refused to halt uranium enrichment and other sensitive atomic work, leading to U.S., European Union and U.N. sanctions that have hobbled the Iranian economy. While progress has been made in narrowing differences on how many uranium enrichment centrifuges Iran will be allowed to operate under a long-term agreement, officials close to the talks say differences remain on lifting sanctions and the duration of any deal.