Kerry says confident Obama can get final deal on Iran 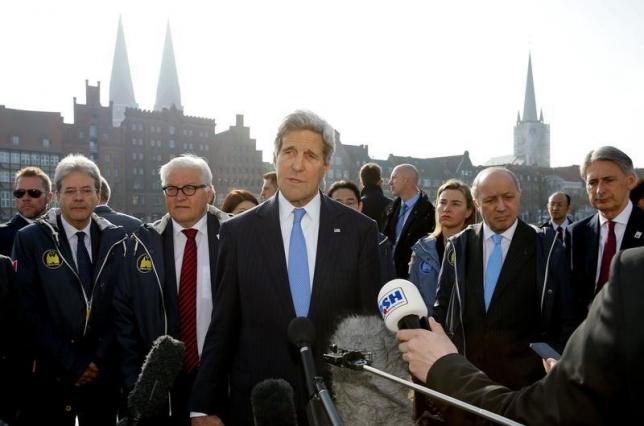 Kerry says confident Obama can get final deal on Iran

LUEBECK, GERMANY - US Secretary of State John Kerry said on Wednesday he was confident Barack Obama would be able to get Congress to approve a nuclear deal with Iran after the US president acknowledged lawmakers would have the power to review an accord with Tehran. "Looming large is the challenge of finishing the negotiation with Iran over the course of the next two and a half months," Kerry said after arriving in Germany for a Group of Seven foreign ministers' meeting in the northern city of Luebeck. "Yesterday there was a compromise reached in Washington regarding congressional input. We are confident about our ability for the president to negotiate an agreement and to do so with the ability to make the world safer," he added. In what was seen as a setback for Obama, the US president agreed on Tuesday that Congress should have the power to review any deal with Iran, giving in to pressure from Republicans and some in his own party over the barbed issue. The role for the Republican-controlled Congress injects a new element of uncertainty into the delicate final stages of negotiations between major powers and Iran aimed at curbing Tehran's nuclear program in exchange for sanctions relief. German Foreign Minister Frank-Walter Steinmeier said the G7 foreign ministers would discuss the Iran talks during their meeting in Luebeck, especially now that Kerry had arrived. "(We'll deal with)... the result between the American administration and Congress, which has a certain influence on whether the final agreement with Iran can succeed by June 30 or not," Steinmeier said. He said the foreign ministers would listen to Kerry's assessment of negotiations with Iranand how the prospect of congressional approval might affect them. Speaking in Iran, the Iranian Foreign Ministry spokeswoman Marzieh Afkham said on Wednesday that Tehran would not let US domestic politics derail the nuclear talks. "That is an issue related to their domestic affairs. We are dealing with the American government," Afkham told a news conference carried by Iranian state television. - Reuters