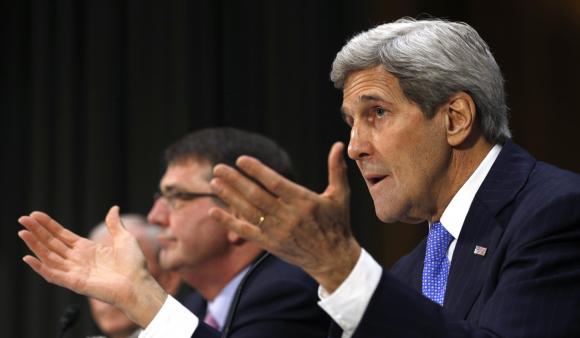 WASHINGTON (Reuters) - US Secretary of State John Kerry told US lawmakers on Wednesday they would not be able to modify any nuclear agreement struck between the United States and Iran despite threats by Republican senators. In congressional testimony, Kerry said he responded with "utter disbelief" to an open letter signed by 47 Republican senators that warned that any nuclear agreement would only last as long as US President Barack Obama remains in office. "When it says that Congress could actually modify the terms of an agreement at any time is flat wrong. You don't have the right to modify an agreement reached executive to executive between leaders of a country," Kerry told the Senate Foreign Relations Committee, which does not include Senator Tom Cotton, the Republican from Arkansas who wrote the letter. The White House slammed the letter as "reckless" and "irresponsible," warning that it interfered with efforts to negotiate with the Iranians. The negotiations, which resume in Lausanne, Switzerland, next week led by Kerry, are at a critical juncture as the sides try to meet an end of March target for an interim deal, with a final deal in June that would ease crippling sanctions against Iran's economy. The letter was an unusual intervention by lawmakers into US foreign policy. The US Constitution divides foreign policy between the president and Congress. "During my 29 years in the Senate I never heard of, or even heard of it being proposed, anything comparable to this," Kerry said. "This letter ignores more than two centuries of precedent in the conduct of American foreign policy." Kerry said the letter undermined and added uncertainty to the "thousands of agreements" the United States signs with foreign governments across the globe.