US and allies discuss new sanctions on Russia over Ukraine: Kerry 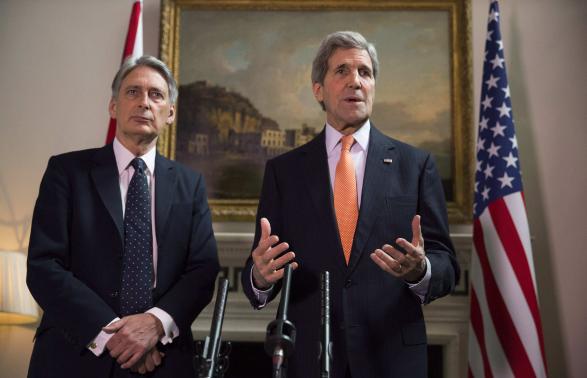 US and allies discuss new sanctions on Russia over Ukraine: Kerry

LONDON (Reuters) - The United States and its allies are discussing imposing more sanctions against Russia for undermining a European-brokered truce in eastern Ukraine, US Secretary of State John Kerry said on Saturday. Kerry made the comments as he began talks with his British counterpart Philip Hammond in London, accusing Moscow of "extraordinarily craven behaviour at the expense of the sovereignty and integrity of a nation". The Kiev military accused Russia on Friday of sending tanks and troops into easternUkraine despite a ceasefire that went into force last Sunday, brokered by France andGermany in a bid to end a conflict that has killed more than 5,000 people. The Kremlin did not immediately respond to the allegation but has always denied accusations in the past that its forces are fighting in Ukraine. Kerry, however, said the United States "knows to a certainty" of Russia's involvement in the conflict and support it was giving to the separatists. "Russia has engaged in an absolutely brazen and cynical process over these last days," the Secretary of State said. "We are talking about additional sanctions, about additional efforts, and I'm confident over the next days people will make it clear that we are not going to play this game," he added. "We're not going sit there and be part of this kind of extraordinarily craven behaviour at the expense of the sovereignty and integrity of a nation." Pro-Russian separatists are building up forces and weapons in Ukraine's south east and the Ukrainian military said on Saturday it was braced for the possibility of a rebel attack on the port city of Mariupol. A rebel attack on Mariupol, a city of half a million people and potentially a gateway to Crimea, which Russia annexed last March, would almost certainly kill off the ceasefire that aimed to end the 10-month-old conflict. CEASEFIRE SHAKEN The ceasefire has already been badly shaken by the rebel capture on Wednesday of Debaltseve, a railway junction in eastern Ukraine, forcing a retreat by thousands of Ukrainian troops in which at least 20 Ukrainian soldiers were killed. British Foreign Secretary Hammond said the ceasefire had been "systematically breached" and he would discuss with Kerry how Europe and the United States could remain united in tackling the challenge in Ukraine. US President Barack Obama's administration has previously said it is considering deepening sanctions against Moscow and is also weighing the possibility of providing weapons to Ukraine's military, although officials stress the priority is to find a political solution. While Ukraine is expected to dominate the talks in London, Kerry and Hammond said they would also discuss the threat from Islamist militants in Syria, Iraq and Libya. Hammond repeated Britain's view that a unity government was urgently needed in Libya"so that the international community can put its weight behind that government in order to squeeze the terrorists out." A US official said Kerry would also discuss Nigeria's upcoming election and the Israeli-Palestinian situation. The Secretary of State travels to Geneva on Sunday for two days of talks with senior Iranian officials on Tehran's disputed nuclear programme as the sides try to resolve differences before a March 31 deadline for a basic framework agreement. US Energy Secretary Ernest Moniz will also attend the talks, the first time he has participated in the Iran negotiations, the US official said. Negotiations between the United States, Russia, China, France, Germany, Britain and Iranhave reached a critical stage. The US official said Moniz's involvement was due to the technical nature of the current talks.