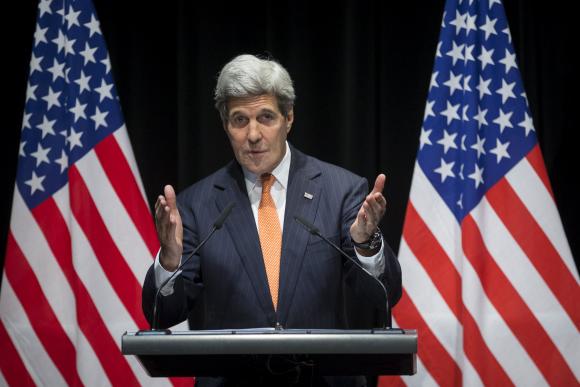 LAUSANNE, Switzerland – Iran's top leader voiced mistrust on Saturday of US efforts to reach a nuclear deal, even as Washington spoke of "genuine progress" towards an outline accord. With just 10 days remaining until an end-of-March deadline, Iran's Supreme Leader Ayatollah Ali Khamenei denounced US 'bullying' in the negotiations and repeated Tehran's denial that it is seeking to develop a nuclear weapon. Speaking after week-long talks with Iran in Switzerland, US Secretary of State John Kerry said there had been real progress towards solving the dispute, which has threatened at times to push the Middle East to the brink of war. But he added it was time for tough choices. "We are not rushing ... but we recognise that fundamental decisions have to be made now and they don't get any easier as time goes by," Kerry said. "It is time to make hard decisions." The six powers negotiating with Iran aim to complete the framework of a final deal by the end of March and reach a full agreement by June 30. Kerry added he would meet European counterparts later in London to try to resolve remaining sticking points. He said talks would then resume next week to see whether a deal was possible. "It is a matter of political will and tough decision making," he said. The West suspects Iran of seeking the ability to produce atomic weapons and the United Nations has imposed stringent economic sanctions on Tehran. Iran says its programme is intended only for peaceful purposes, such as medical technology and nuclear energy, and wants the swift lifting of sanctions. 'IMPOSITION AND BULLYING' Iran's Khamenei, who has the last word on all matters of state, reiterated in a speech that Tehran would not be pressured into giving in to Western demands. "What the Iranian people don't want is imposition and bullying from America," he said, at one point repeating the phrase "Death to America" after it was shouted from the crowd. He accused Washington of seeking to foment instability in the Middle East. "They raise the issue of an atomic bomb. They know themselves that we are not pursuing nuclear weapons. But they just use that as an excuse to pressure the Iranian people." He criticised "arrogant" Western countries for what he said was their role in bringing about a halving of world oil prices which has squeezed Iran's economy. "They insist on putting pressure on our dear people’s economy. What’s their goal? Their goal is to put the people against the system," he said. Iranian President Hassan Rouhani struck a more positive note earlier, saying there was "nothing that cannot be resolved" between the parties. Kerry said the six powers - the United States, Britain, France, Germany, Russia and China - would coordinate to reach an understanding on the major issues. As talks between Kerry and his Iranian counterpart broke up on Friday after a week of negotiations, the sides appeared deadlocked over sensitive atomic research and the lifting of sanctions. Israel views the Iranian nuclear programme as an existential threat, fearing a deal would allow Tehran to retain the potential to build a bomb. French Foreign Minister Laurent Fabius said his country wanted an agreement that was sufficiently robust to prevent this. France has been demanding more stringent restrictions on the Iranians than the other Western delegations. At one point during the talks, Fabius phoned his team to ensure it made no more concessions, officials said. US officials privately bristle at France’s outspoken criticism of aspects of the talks and of Washington's strategy. Officials have expressed concerns that the French might block a deal. –Reuters