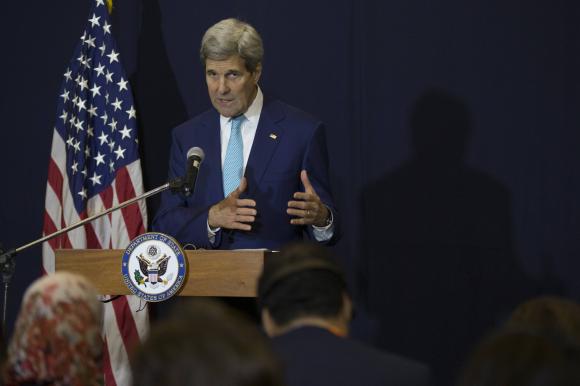 SHARM EL-SHEIKH, EGYPT - US Secretary of State John Kerry said on Saturday on the eve of fresh talks with Iran over its nuclear-power program that it was unclear whether an interim could be deal reached by the end of the month. "I can't tell you whether or not we can get a deal," Kerry told a news conference. The United States and five other major powers will resume negotiations with Iran in Lausanne, Switzerland on Sunday ahead of a deadline at the end of March for a framework deal, with a final agreement in June. On next week's Israeli election, Kerry said the United States hoped that whatever the outcome it would help push the peace process with Palestinians forward. Opinion polls show Israel's center-left opposition is poised for an upset victory in the parliamentary elections over Prime Minister Benjamin Netanyahu's party. The United States "remains hopeful that whatever the choice that the people of Israel make, that there will be an ability to be able to move forward on those efforts," Kerry said, referring to stalled peace talks with the Palestinians. He declined to elaborate on prospects of resuming the talks, with an election just days away. - Reuters