Kerry tries again with Lavrov on Syria; US warns patience not infinite 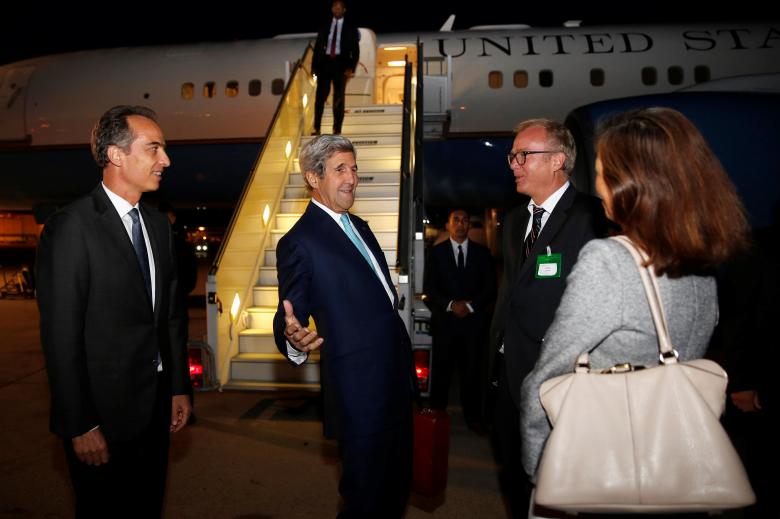 Kerry tries again with Lavrov on Syria; US warns patience not infinite

GENEVA - US Secretary of State John Kerry flew into Geneva on Friday for a new round of talks with Russia on a Syrian ceasefire, with US officials saying they believed a deal was still possible, but warning that the talks could not go on forever. Senior State Department officials briefing reporters on Kerry’s flight played down the prospect of a final breakthrough with Russian Foreign Minister Sergei Lavrov on Friday, although they said “steady progress” had been made in recent weeks. "We’ve been taking issues off the table because we’ve reached an understanding on them and continue to have some issues that remain outstanding and that we have been unable to close," one official said. "We can’t guarantee at this point that we are on the cusp of finishing," he said, adding that the remaining issues were highly technical and complicated. "There are a number of areas that we are going to have to continue to discuss with the Russians tomorrow and hopefully beyond tomorrow … That said, I think if we didn’t think that there remained a possibility of getting this done, we would not be going back to Geneva." The United States and Russia have backed opposite sides in Syria's civil war, which shows little sign of ending after 5-1/2 years of violence in which half the pre-war population has been uprooted. Moscow supports Syrian President Bashar al-Assad and Washington supports the opposition, saying Assad must go. Kerry’s meeting with Lavrov will be their third in two weeks and they have spoken several times by telephone to try to narrow their differences on a Syrian peace plan. A second US official said that while Kerry would try to make progress, “patience is not infinite” and the United States would not simply keep talking if a conclusion was not reached “relatively soon.” “That doesn’t mean today, it doesn’t mean tomorrow … but we’ll judge when we deem that there’s no purpose to keep trying.” The officials declined to elaborate on what Washington might do if the talks broke down. “If we thought (the Russians) were just playing for time, we wouldn't have come back to talk,” the first official said. “If we get to the point where we think they are just playing for time, that’s probably when you’ll see us go in a different direction.” Kerry’s proposal for military cooperation with Russia over Syria has faced strong pushback from US defence and intelligence officials who argue that Moscow cannot be trusted. The second official said one of the reasons Kerry kept up the effort was because the Syrian opposition supported it as a way to stop the worst violence in their country. Under the plan being discussed by Kerry and Lavrov, a cessation of hostilities agreement would halt violence between rival forces and open humanitarian corridors Russia has insisted that opposition groups separate from al-Qaeda linked militants in cities such as Aleppo. Washington wants Assad’s air force grounded to stop its attacks on opposition forces and civilians. The second US official stressed that any agreement with Russia would have to include an end to the siege by government forces around Aleppo, Syria's second city. “That is still very much the focal point of the conversations we have been having and will be very much an issue (on Friday),” he said. -Reuters