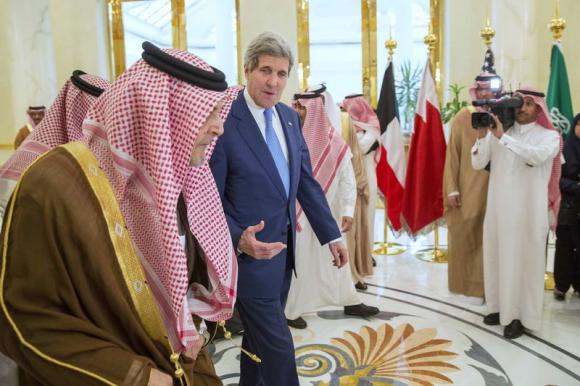 RIYADH (Reuters) - US Secretary of State John Kerry reassured Gulf Arab states on Thursday that Washington was not seeking a "grand bargain" with Iran, in reference to wider political and security cooperation, and said a nuclear deal with Tehran would be in Gulf interests. The United State's Gulf allies, particularly the Sunni Muslim kingdom of Saudi Arabia, are concerned that Shi'ite Muslim Iran will be left empowered by a mooted agreement to end years of dispute over its nuclear ambitions. But after meetings with King Salman and Foreign Minister Prince Saud al-Faisl, Kerry made clear that Washington would not ignore Iran's activities. "Even as we engage in these discussions with Iran around its nuclear program, we will not take our eye off of Iran’s other destabilizing actions in places like Syria, Lebanon, Iraq and the Arabian peninsula, Yemen particularly," said Kerry. The US secretary of state arrived in Riyadh late on Wednesday from Montreux, Switzerland, where he said he had made progress in talks with Iranian Foreign Minister Mohammad Javad Zarif. Gulf countries, like Israel and many Western states, fear that Iran is using its atomic programme to develop nuclear weapons capability, something Tehran denies. Saudi Arabia regards Iran as its main regional rival and the two countries back opposing sides in wars and political struggles across the region, often along sectarian lines. As such, Saudi Arabia and its allies worry that a possible atomic accord will not stop Iran from gaining the bomb. They are also concerned that it would lift international pressure on Tehran and give it more room to intervene in regional issues. Speaking alongside Kerry, Prince Saud said the involvement of Iran in the push being made by Iraqi forces alongside Shi'ite militias to retake the city of Tikrit from Islamic State was a "prime example" of what worries Saudi Arabia. He said Iran was taking over Iraq.