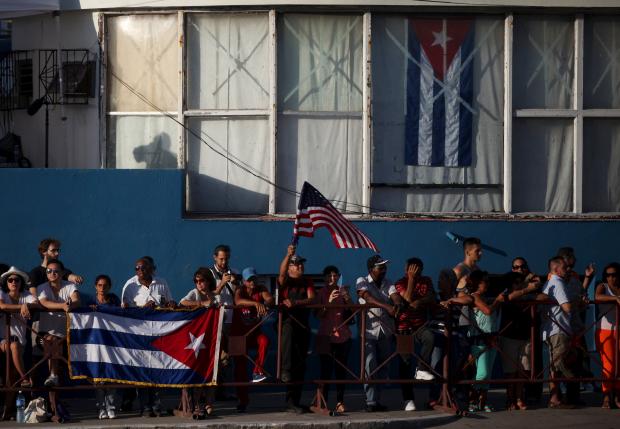 HAVANA - US Secretary of State John Kerry called for political change in Cuba on Friday, telling Cubans they should be free to choose their own leaders, as he watched the US flag fly at the American embassy in Havana for the first time in 54 years. Leading a ceremony to mark the restoration of diplomatic relations between the Cold War adversaries, Kerry declared a new era in US-Cuban relations but pressed the Communist government on democracy and human rights. "We remain convinced the people of Cuba would be best served by a genuine democracy, where people are free to choose their leaders," he said in a one-party state where the media is tightly controlled and political dissent is repressed. "We will continue to urge the Cuban government to fulfill its obligations under U.N. and Inter-American human rights covenants," Kerry said, his words accurately translated into Spanish and broadcast live on Cuban state television. His comments drew a firm riposte from Cuban Foreign Minister Bruno Rodriguez, who defended Cuba at a news conference with Kerry and criticized the United States' own record on rights, referring to racial strife and police brutality in America. Speaking later with reporters, Kerry said the US Congress was unlikely to lift a punishing economic embargo on Cuba unless human rights improved. "There is no way Congress is going to vote to lift the embargo if they're not moving with respect to issues of conscience," said Kerry, who in the first visit to Cuba by a US secretary of state in 70 years met for about an hour with some of the country's most prominent dissidents. Cuba fiercely rejects such conditions and it declined to attend a US reception where the dissidents were present. Josefina Vidal, Cuba's lead negotiator in talks on restoring diplomatic relations, told Reuters that Cuba's sovereignty was not negotiable and Cuba has no interest in placating its enemies in the United States. "We are not going to make a decision to try to please or respond to people who don't want our well-being," Vidal said in an interview. "Cuba will never do anything, nor will it move its position one millimetre to try to respond." While the tone in US-Cuban relations has improved greatly since detente was announced in December, the blunt statements and rebukes underscored how far the two countries are from normal relations after decades of hostilities that outlived the Cold War. Both sides stressed Friday that the path towards normalization of overall relations would be lengthy and suffer occasional setbacks. Cuba wants the United States to end its economic embargo of the island, return the US naval base at Guantanamo Bay in eastern Cuba and halt radio and television signals beamed into Cuba. The United States is seeking the return of fugitives granted asylum in Cuba and backs the claims of Americans whose property was nationalized in the years after Fidel Castro seized power in a 1959 revolution. SUN SHINES ON SEASIDE CEREMONY The sunlit ceremony at the embassy overlooking the Malecon, the broad esplanade along Havana's seafront, was a major symbolic step on a path that opened last December when President Barack Obama and President Raul Castro announced they would seek to normalise ties. Three retired Marines who last lowered the flag in 1961 took part in the ceremony, handing a new flag to the Marine Color Guard. As the flag was raised, there were loud cheers and applause from the crowd of US and Cuban dignitaries and longtime proponents of US-Cuban engagement, and from people watching from neighbouring balconies. The United States and Cuba formally renewed diplomatic relations and upgraded their diplomatic missions to embassies almost four weeks ago. While the Cubans celebrated with a flag-raising in Washington on July 20, the Americans waited until Kerry could travel to Havana. He took advantage of his trip to reassure Cuban dissidents of continued support from Washington. "Kerry's message was that the United States would continue to support democracy and pressing the subject of human rights in Cuba," said Martha Beatriz Roque, one of 75 former political prisoners jailed in what is known as the Black Spring of 2003. But dissidents were not invited to the flag-raising in deference to the Cuban government, drawing sharp rebukes from opponents of the opening to Cuba, who say Havana has made no concessions in exchange for diplomatic ties. "Secretary Kerry's visit is especially insulting for Cuba's dissidents," said Jeb Bush, a Republican candidate for next year's US presidential election. He is also a former governor of Florida, home to the biggest Cuban emigre population. "That courageous Cubans whose only crime is to speak out for freedom and democracy will be kept away from the official ceremony opening the US Embassy is yet another concession to the Castros," Bush said. -Reuters