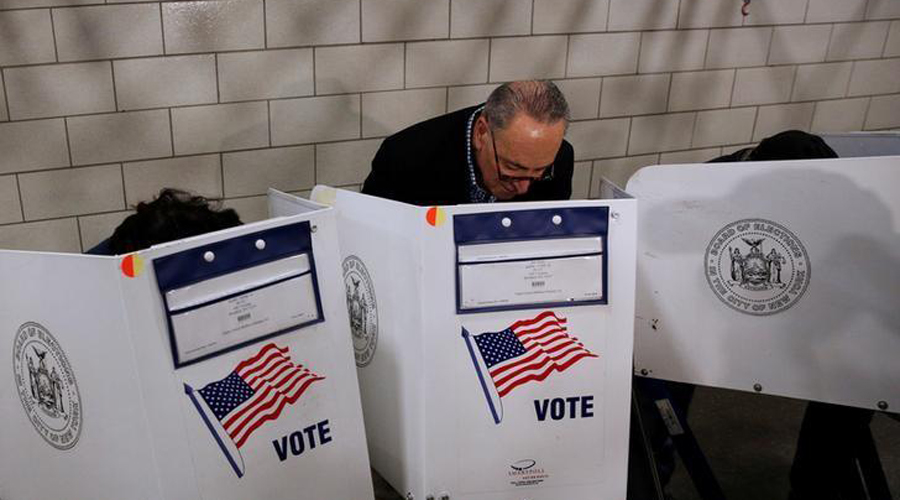 WASHINGTON - Republicans will maintain their six-year control over the US House of Representatives, major TV networks projected on Tuesday night, as the party also mounted a strong defense of its Senate majority against tough Democratic challengers.
With Republican presidential nominee Donald Trump and Democratic rival Hillary Clinton locked in a close battle for the White House, television networks said Republicans, as widely projected in opinion polls, would keep control of the House. Winners had been declared so far in 21 Senate races, with Democrats making a net gain of only a single seat so far, with a handful of additional opportunities for them remaining undecided. Some key races were seen as too close to call. Party dominance in Congress will be a crucial determinant of the policy-making outlook for the next president. The House has been in Republican hands since 2011 and has been a bastion of resistance to Democratic President Barack Obama's agenda. Democrats picked up their first Senate seat from Republicans as Representative Tammy Duckworth, as expected, defeated Senator Mark Kirk in Illinois, according to the major TV networks. Duckworth is a double-amputee Iraq war veteran. With her victory, Democrats need to pick up four more seats from Republicans to win a majority in the 100-member Senate. The networks projected that in Indiana, former Senator Evan Bayh failed in his bid to return to the Senate, losing to Republican Representative Todd Young. Bayh's loss was a missed opportunity for Democrats to gain a seat. In Florida, incumbent Senator Marco Rubio, who ran unsuccessfully for the Republican presidential nomination earlier this year, was declared the winner and re-elected. PORTMAN RE-ELECTED IN OHIO TV networks said Republican Senator Rob Portman, who refused to campaign with Trump, was re-elected in Ohio. Republican Senator Richard Burr was declared the winner in North Carolina over Democratic challenger Deborah Ross in another race where Democrats had hoped to pick up a seat. In Wisconsin, Senator Ron Johnson was projected to be the winner over Democratic challenger Russ Feingold. Continued Republican dominance in Congress could stymie any legislative agenda pursued by Clinton, if she is elected. A Trump victory, with a Republican Congress, could spell a swift demise for Democratic President Barack Obama's health reforms. Republicans had to defend far more Senate seats this year than Democrats. Some analysts had raised the possibility of the 2016 election season ending with a 50-50 split in the Senate. In such an outcome, the new US vice president - either Democrat Tim Kaine or Republican Mike Pence - would be the tiebreaker in the Senate and determine control of that chamber. To win Senate control, Democrats would have to score a net, five-seat gain. Republicans hold 54 Senate seats to 44 Democratic seats and two independents who align with Democrats. -Reuters