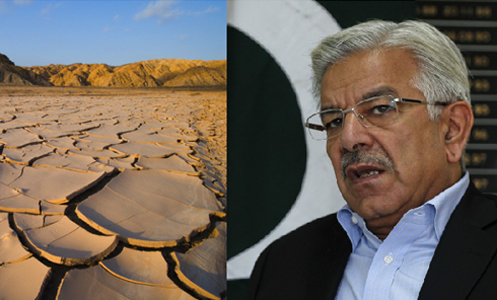 ISLAMABAD (92 News) – Federal Minister for Water and Power Khawaja Asif has said Pakistan would have to bear extreme drought on account of shortage of water reservoirs, 92 News reported. Talking to the media on Monday, the minister blamed preceding governments for maladministration and failure to address the water crisis in the country efficiently. Pakistan has an acute shortage of water reservoirs which results in wastage of water every year, he said, the previous governments paid no heed to the impending water crisis. “Whenever a government plans to build water reserves, it falls prey to political differences,” Khawaja Asif said, “The floods and subsequent loss of crops are due to shortage of water reservoirs.” Pakistan is already suffering from shortage of water, whereas the inability to store water for domestic use and making electricity is causing further damage, he said. Pakistan is moving towards extreme drought in coming years, of which the people have no idea about, he emphasised. "For this purpose, the government aims to resolve the water-crisis with India." The minister was hopeful that the government will be able to overcome the electricity crisis in coming two to three years. He also highlighted the need for a political consensus over plans to build short and large dams. “These dams will not only act as water reservoirs helping in prevention of floods and water-shortage, but also help generate electricity,” he said.