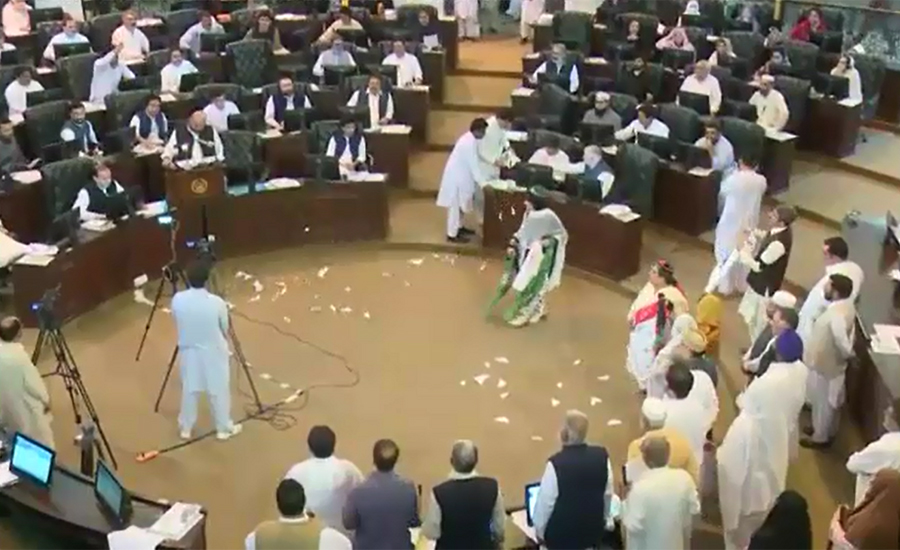 PESHAWAR (92 News) – The Khyber Pakhtunkhwa government presented a new surplus budget for fiscal year 2019-20 with a record outlay of Rs900 billion on Tuesday. Presenting the budget in Provincial Assembly, Finance Minister Taimur Saleem Jhagra said the total revenue has been estimated at Rs900 billion rupees against the estimated expenditure of Rs 855 billion. The minister said that the province will receive Rs453 billion rupees from the federal taxes and Rs54 billion from the federal divisible pool for war on terror. It will also receive an amount of Rs151 billion from the federal government for development of tribal districts in addition to Rs55 billion as net profit of electricity. He said that Rs108 billion has been allocated for the Annual Development Programme which is a record. This amount is 41 percent more than the current ADP. The minister announced a 10 percent increase in the salary of government employees from scale one to 16 and five percent from 17 to 20. He said that the age of superannuation has been enhanced from 60 to 63 years which will help save Rs20 billion annually. Earlier, a meeting of the Khyber Pakhtunkhwa cabinet was held in Peshawar with Chief Minister Mahmood Khan in the chair. The cabinet approved budgetary proposals for new financial year.