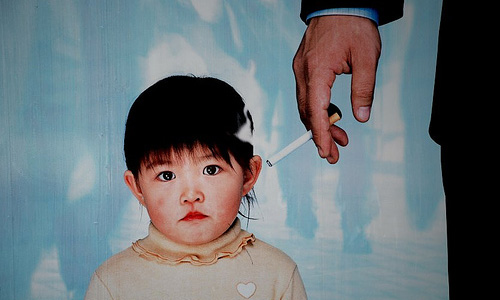 FINLAND - In a Finnish study spanning 26 years, kids exposed to parental smoking were more likely to develop plaque in their carotid arteries as young adults than kids who were not exposed to secondhand smoke. These findings and others suggest the health effects of passive smoking on children are not limited to respiratory or developmental health, but can have a long-term impact on cardiovascular health, said senior author Costan G. Magnussen of Menzies Research Institute Tasmania in Hobart, Australia. Researchers used frozen blood samples from more than 1,000 kids ages three to 18 collected in 1980, along with parental reports of smoking status in 1980 and 1983 from a larger group of kids. They also had ultrasounds of the adult children in 2001 and 2007. They tested the blood samples for levels of cotinine, a byproduct of cigarette smoke exposure, and looked for a buildup of plaque in the carotid arteries, two large blood vessels of the neck, on the adult ultrasounds. Carotid plaque can cause narrowing of the arteries, increasing blood clot and stroke risk, according to the National Institutes of Health. About two percent of the grown-up kids had a carotid plaque uncovered by ultrasound at an average age of 36. More than 84 percent of kids of nonsmokers had no cotinine in their blood, compared to 62 percent of those with one smoking parent and 43 percent when both parents smoked. The authors assumed that kids with a parent who admitted to smoking who did not have cotinine in their blood had been exposed to less secondhand smoke, possibly because parents had been careful to keep their smoking away from the child. Compared to kids of nonsmokers, these kids were about one and a half times as likely to have carotid artery plaque as adults. But kids of smokers with poorer “smoking hygiene” that exposed them to more smoke (and resulted in cotinine in their blood) were four times as likely to have carotid artery plaque as those with nonsmoking parents. “What we were able to do that others have not, is show that parents who are unable or unwilling to quit smoking can still limit the impact of their smoking on their child’s future cardiovascular health by changing their smoking behavior to limit the amount of smoke their child is exposed to,” Magnussen told Reuters Health by email. Many smoking parents did not smoke inside the home or car, or smoked well away from their children, to the point where there was no evidence for passive smoke exposure in their child’s blood, Magnussen said. Plaque buildup, or “atherosclerosis,” can begin in childhood so the results are not surprising, according to Karin B. Michels, an epidemiologist and associate professor at Harvard Medical School in Boston. But only 64 out of more than 2,000 grown subjects did develop plaque, which is a very small number, Michels told Reuters Health by phone. “I would be a little cautious but overall I think it’s an important study and lends more support to the risk of passive smoking for children,” she said. “I don’t doubt that there is a risk and it could be affecting other things like blood pressure.” Atherosclerotic plaque is particularly dangerous when it develops at an early age, she said. This group of kids grew up in a time when smoking was much more ubiquitous, and they would have been exposed to more secondhand and thirdhand smoke, said Melbourne Hovell of San Diego State University, who was not part of the new study. “Thirdhand smoke” is that which lingers on surfaces or in environments and may combine with other chemicals to create toxic substances over time, Hovell told Reuters Health by phone. Early smoke exposure may have several deleterious effects other than just plaque buildup in the arteries, including an increased risk of later breast cancer and a predisposition to nicotine addiction, Hovell said. Plus, children of smokers are more likely to become smokers themselves, triggering a cascade of other health risks. “It’s pretty much a perfect storm,” Hovel said. “The other message for the lay public is to not allow any smoking in your home or car,” as it will contaminate the environment indefinitely, he said. “Parents with young children probably should avoid buying a used car that has been smoked in.” - Reuters