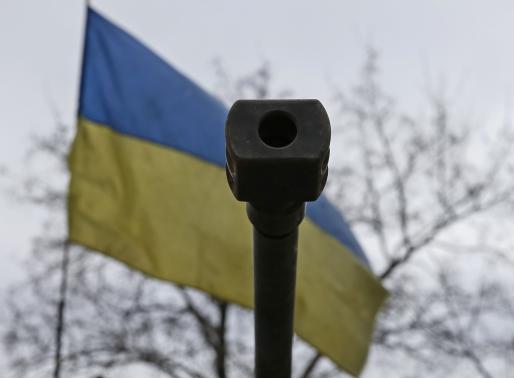 DEBALTSEVE, UKRAINE/KIEV (Reuters) - Kiev accused Russia on Friday of sending more tanks and troops into eastern Ukraine and said they were heading towards the rebel-held town of Novoazovsk on the southern coast, expanding their presence on what could be the next key battlefront. Russia did not immediately respond to the accusation which, if confirmed, would be almost certain to finally kill off a tattered European-brokered truce that came into force on Sunday. Moscow has always denied such charges in the past. Novoazovsk lies on the Sea of Azov, 40 km (25 miles) east of the port city of Mariupol. It was captured by rebels last year and could be a launching-pad for more pressure on Mariupol, a gateway to the south and possibly to the Crimea peninsula annexed by Russia a year ago. "In recent days, despite the Minsk (ceasefire) agreement, military equipment and ammunition have been sighted crossing from Russia into Ukraine," military spokesman Andriy Lysenko said. He said more than 20 Russian tanks, 10 missile systems and busloads of troops had crossed the border into Ukraine. Western nations have clung to the hope that they can revive the peace deal brokered byFrance and Germany in the Belarussian capital Minsk on Feb. 12 even though the rebels ignored it to seize the important railway hub of Debaltseve. The German, Russian, Ukrainian and French foreign ministers are expected to meet next week to pursue peace moves, Russian media reported. But hopes were slim even before the latest sighting of Russian reinforcements, also reported by the United States this week. Renewed fighting between the pro-Russian separatists and government forces in eastUkraine also soured the mood as crowds gathered in Kiev for the first anniversary of the uprising that toppled a Moscow-leaning president but culminated in war. "The number of attacks show the terrorists do not want to completely silence their guns," Ukrainian military spokesman Anatoly Stelmach said, listing 49 attacks in the past 24 hours. DEVASTATION IN DEBALTSEVE The fiercest fighting since a truce came into effect on Sunday was in and around Debaltseve, a strategic rail hub, until demoralized and weary Ukrainian forces withdrew on Wednesday. A Reuters correspondent who reached Debaltseve for the first time since this week's fighting said much of the town was in ruins, with little left of rows of apartment blocks. The black, blue and red flag of the rebels' self-proclaimed Donetsk People's Republic flew over the town hall. Many of the walls of the buildings still standing were pock-marked by bullets, or had huge holes blown in them, and the burnt-out hulks of tanks and military trucks lay abandoned on the road. Heavily armed rebels and tanks patrolled the streets on the outskirts, where bridges had been blown up and the railway appeared to have suffered a lot of damage. Some rebels were on the lookout for Ukrainian soldiers with binoculars. The rebels said government forces had also shelled their positions, including in the separatist stronghold of Donetsk, the main city in the two regions they control. In Kiev, large crowds headed for Independence Square, called locally the Maidan, in the heart of the capital to mark the first anniversary of the shootings of about 100 protesters and the overthrow of President Viktor Yanukovich, who fled to Russia soon after the killings. Some people wore combat fatigues showing allegiance to pro-government militias that have fought pro-Russian separatists who rose up in the east last April. The mood was somber. More than 5,600 people have been killed in fighting since mid-April last year, soon afterRussia annexed Crimea from Ukraine following Yanukovich's overthrow. The failure to crush the rebellion, which Kiev and the West say is backed by Russian troops and weaponry, is a bitter blow to the pro-Western leadership in Kiev. It has not only sapped morale but also deprived central and western Ukraine of access to an industrial region that provided about 16 percent of gross domestic product, making the country's economic crisis even worse.