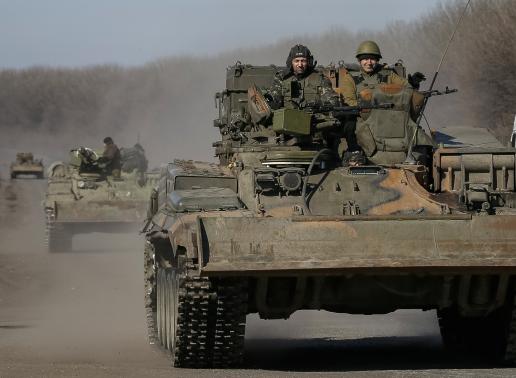 KIEV/DONETSK, UKRAINE (Reuters) - Ukraine's military said on Monday it could not start withdrawing heavy weapons from the front line in the east as required under a tenuous ceasefire because pro-Russian separatists who advanced last week were still attacking its positions. A truce to end fighting that has killed more than 5,600 people appeared stillborn last week after rebels ignored it to capture the strategic town of Debaltseve in a punishing defeat for Kiev. Nevertheless, the peace deal's European sponsors still hold out hope it can be salvaged, now that the Moscow-backed separatists have achieved that objective. Kiev says it fears the rebels, backed by reinforcements of Russian troops, are planning to advance deeper into territory the Kremlin calls "New Russia". Moscow denies aiding the rebels. Fighting has diminished since Kiev's forces abandoned Debaltseve in defeat last Wednesday, and there were hopeful signs for the truce over the weekend, with an overnight exchange of around 200 prisoners late on Saturday and an agreement on Sunday to begin pulling back artillery from the front. But Kiev said on Monday that it still could not start the artillery withdrawal. "Given that the positions of Ukrainian servicemen continue to be shelled, there can not yet be any talk of pulling back weapons," spokesman Vladislav Seleznyov said in a televised briefing. Anatoly Stelmakh, another military spokesman, said rebel forces had attacked the village of Shyrokyne overnight, along the coast on the road to Mariupol, a port of half a million that Kiev fears could be the next big rebel target. "The fighters have not stopped their attempts to storm our positions in Shyrokyne, in the direction of Mariupol. At midnight the armed groups again attempted unsuccessfully to attack our soldiers. The battle lasted half an hour." Rebel commander Eduard Basurin denied the fighters had launched any such attack, and said the situation was calm. "At the moment all is quiet, there is no shelling," he told Reuters. In the biggest rebel stronghold Donetsk, occasional artillery fire could be heard through the night and on Monday morning, although it was not clear who was firing and it was far less intense than before the truce. The separatist press service DAN reported two homes destroyed by shelling on the city's outskirts overnight. Nearly a million people have been driven from their homes by the war between pro-Moscow separatists in eastern Ukraine and government forces. Last week's ceasefire was reached after the rebels abandoned a previous truce to launch their advance, arguing that previous battle lines had left their civilians vulnerable to government shelling. "I hope, I just hope, in the truce. No one knows what will happen with the way the sides are behaving," said Donetsk resident Sergei, 52. "Now it's quiet, it's ok on the streets. You want such quiet. It was difficult to sleep before, not knowing whether you would wake up." Kiev says the rebels are reinforcing near Mariupol for a possible assault on the port, the biggest city in the two rebellious provinces still in government hands. Defence analyst Dmytro Tymchuk, who has close ties to the military, said rebels had brought 350 fighters and 20 armoured vehicles including six tanks to the area. Kiev also fears unrest could spread from the war zone to other parts of the mainly Russian-speaking east, where its troops are firmly in control and most residents are loyal but violent separatist demonstrations have occasionally flared in the past year. Two people were killed on Sunday in Kharkiv, 200 km (140 miles) from the war zone, in a blast at a demonstration marking the anniversary of the deaths of 100 protesters a year ago in an uprising that toppled the country's pro-Moscow leader. Kiev said it had arrested four suspects who had received weapons and instructions in Russia.