Killer of 'American Sniper' Kyle sentenced to life in prison 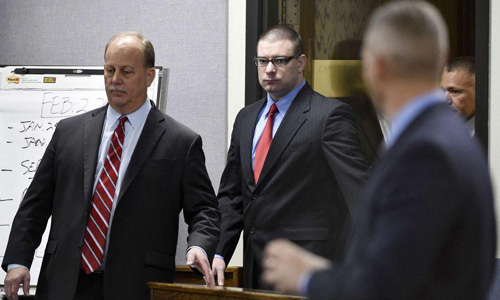 Killer of 'American Sniper' Kyle sentenced to life in prison

TEXAS (Reuters) - Eddie Ray Routh was sentenced to life in prison without the possibility of parole on Tuesday after a Texas jury found him guilty of murdering Chris Kyle, the former US Navy SEAL whose autobiography was turned into the hit movie "American Sniper." Routh, 27, a former US Marine, was found guilty of fatally shooting Kyle and Kyle's friend, Chad Littlefield, multiple times at a gun range about 70 miles (110 km) southwest of Fort Worth in February 2013. Prosecutors said he ambushed the two from the rear, waiting for Kyle to completely unload his weapon at the range before he attacked with a barrage of gunshots. Kyle, a former ranch had turned SEAL credited with the most confirmed kills of any US military sniper, has been lionized in his home state of Texas. He became entrenched in US popular culture in large part due to his best-selling book and the Academy Award nominated movie directed by Clint Eastwood and starring Bradley Cooper. After leaving military service, Kyle, who battled his own mental demons, helped counsel troubled veterans with trips for shooting and talks. He had driven Routh to the range with Kyle's neighbor, Littlefield. "You took the lives of two heroes, men that tried to be a friend to you. You became an American disgrace," Littlefield's brother-in-law, Jerry Richardson, said of Routh at a county court in the rural Texas city of Stephenville after the sentence was handed down. The jury deliberated for a little more than two hours before reaching a verdict. Prosecutors chose not to go for the death penalty and had been seeking a life sentence without parole. Defense lawyers argued that Routh was a paranoid schizophrenic and should be declared innocent by reason of insanity. Even though Kyle's autobiography has been criticized for language seen as demeaning Iraqis and has been on the losing end of a defamation suit brought by former Minnesota Governor Jesse Ventura, Kyle is revered in Stephenville, near where he grew up and went to college. At the Texas State Cemetery in Austin, where Kyle is buried along with other major figures in the state's history, his grave has been the most visited after his body was brought to the site in a flag-waving procession that spanned about 200 miles of Texas highway in 2013. In closing arguments, prosecutor Jane Starnes said Routh acted coldly and deliberately when he gunned down the two and then plotted his escape. "That is not insanity. That is just cold, calculated capital murder," Starnes said. 'NEVER SAW IT COMING' Defense lawyers told the jury that Routh had been to hospitals four times because of his mental illness and was diagnosed as psychotic. They said he was suffering a paranoid episode when he went to the range and met the state's legal definition of insanity. “He killed those men because he had a delusion. He believed in his mind that they were going to kill him.” Warren St. John said in closing arguments. Widow Taya Kyle walked out of court as the defense was making its final arguments, slamming a door behind her. The judge told jurors they could find a person innocent by reason of insanity if the defendant did not know the conduct was wrong due to a severe mental defect or illness. A forensics expert called by prosecutors said Kyle and Littlefield were shot in the back at close range. They had no time to remove loaded guns that they had holstered. "He (Kyle) absolutely never saw this coming," said crime scene analyst Howard Ryan. Prosecutors said the two were shot by 12 or 13 bullets and that Routh put on an act to get out of trouble. "He is capable of dreaming up excuses to get his hide out of trouble at convenient times depending on who he is talking to," prosecutor Alan Nash said. Jurors saw police videos in which Routh confessed to the killings in a rambling speech and heard audio tape of a prison phone call to a reporter where he talked about shooting Littlefield first, saying he was angry that he came to the range. Routh, dressed in a dark suit and sporting a crew cut, took notes during large parts of the trial. He did not testify and has been behind bars since his arrest hours after the shooting.