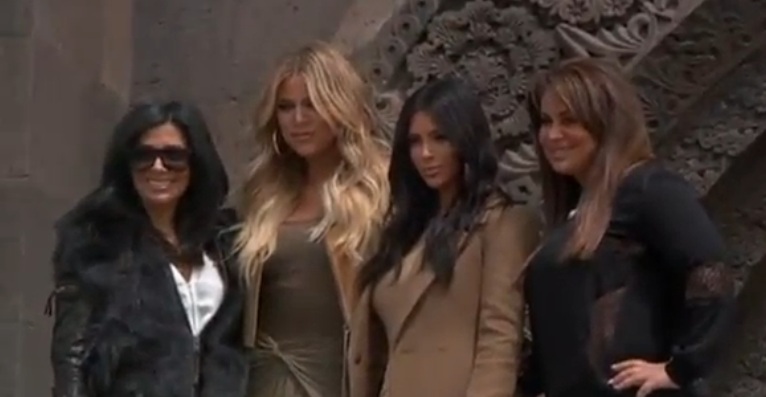 YEREVAN - Armenia rolled out the red carpet for US reality TV star Kim Kardashian as she visited her ancestors' homeland on Thursday, ahead of the 100th anniversary of mass killings of Armenians by Ottoman soldiers. Prime Minister Hovik Abrahamyan received Kardashian and her family in the capital Yerevan and praised their contribution to "international recognition and condemnation of the Armenian genocide," his press service said. Kardashian, her rapper husband Kanye West, their child North West and her sister Khloe were greeted by hundreds of fans when they arrived in the former Soviet republic on Wednesday night. "Armenia we are here!!!!! We are so grateful to be here & start this journey of a lifetime! Thank you to everyone who greeted us!" Kardashian, who was followed by crowds as she toured Yerevan on Thursday, wrote on her Instagram account. The star of "Keeping Up With the Kardashians" is on her first visit to the country, which her ancestors left for the United States. She made no public mention of the mass killings in World War One which will be commemorated by Armenia on April 24. Armenia, some Western historians and some foreign parliaments refer to the mass killings as genocide. Muslim Turkey accepts many Christian Armenians died in partisan fighting beginning in 1915, but it denies that up to 1.5 million were killed and that it amounted to genocide. Speaking at an Armenian Catholic church in Rome before a planned commemoration at the Vatican on Sunday, Pope Francis said it was time for countries to seek reconciliation over what he called the "systematic annihilation" of 100 years ago. "We invoke Divine Mercy to help us all, for love of truth and justice, to heal every wound and bring about concrete gestures of reconciliation and peace between nations that still have not been able to reach a reasonable consensus on the interpretation of these sad events," the pope said. - Reuters