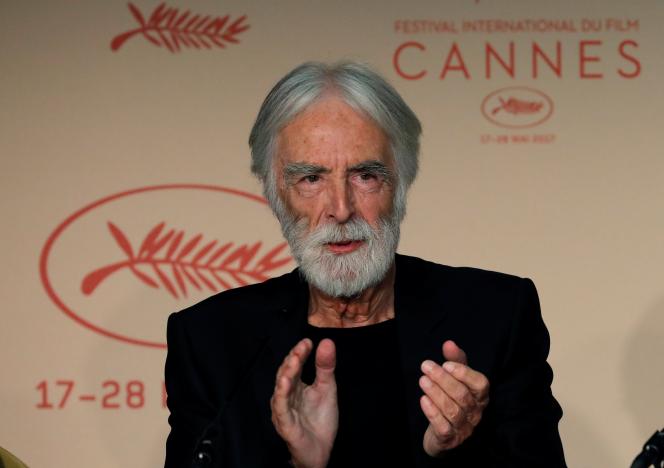 Known for his uncompromising and often cruel stories such as "Funny Games" and "Cache", critics were right to assume that the title of Haneke's latest film was ironic.

Starring French film royalty Isabelle Huppert and Jean-Louis Trintignant, the most striking moment in this story of a dysfunctional bourgeois family is its ending - when Trintignant is wheeled out of a seaside party by his adorable but sinister granddaughter.

"It took three days to shoot the end of the film," Trintignant told a news conference after the screening.

Several critics complained that Haneke, 75, whose last Palme d'Or was for "Amour", also starring Trintignant as a character facing the end of life, was retreading old ground.

The Guardian's Peter Bradshaw hailed "Happy End" as "a black comedy of pure sociopathy ... as gripping as a satanically inspired soap opera, a dynasty of lost souls".

While co-star Isabelle Huppert has now made four films with Haneke, for British actor Toby Jones it was a first.

"Before reading the script I said yes, it doesn't matter if it's one line, of course I will do anything for Michael Haneke," said Jones, who plays Huppert's fiance.

"He's one of the great masters of cinema so it doesn't really matter how big the part is, you're aware you're going to go on a very interesting journey."

All the actors spoke of Haneke's demanding, precise direction, not allowing them any room to diverge from his vision of the characters.

"He is assiduous in draining any kind of storytelling that the actor might be interested in doing," Jones said in admiring tones.

Haneke said: "My aim is always to tell as little as possible to provoke the maximum in the viewers’ imagination."

That also goes for the remarkable closing scene, which was a physical challenge for the 86-year-old Trintignant.

"I asked the producer, 'if I do this scene without giving anyone any trouble, will you let me skip Cannes?'," he said to uproarious laughter from reporters at the festival.