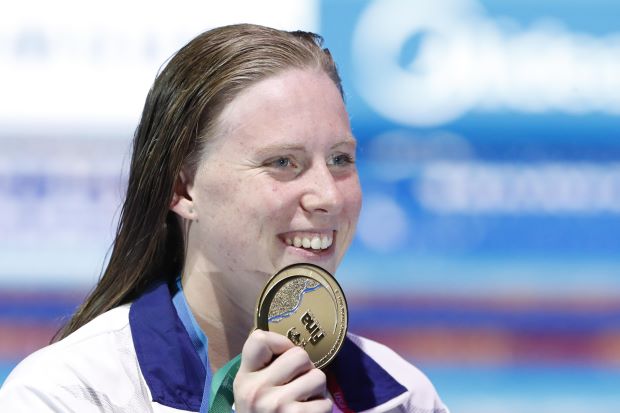 BUDAPEST - The world championships came alive as Lilly King of the United States won the women's 100 metres breaststroke title in one of three world-record swims at the end of a breathtaking evening session.

Adam Peaty of Britain continued his breaststroke trail-blazing with his second world mark of the day to reach the 50m final and Canada's Kylie Masse produced a world-best time to win the women's 100m backstroke gold medal.

There was more history too for Katie Ledecky following a routine gold in the women's 1500m freestyle. The American claimed the 12th world title of her short career.

The evening will be long remembered by Olympic champion King, who posted one minute 4.13 seconds to overhaul the world-record mark set by Lithuania's Ruta Meilutyte in 2013.

King held off the threat of Russian rival Yuliya Efimova, in a race billed as a grudge rematch of their acrimonious Olympic final, and the U.S. secured a memorable one-two as Katie Meili touched for silver in one minute 5.03 seconds.

"That race was always going to be a showdown, an exciting dog fight," King told reporters.

"We get a lot of rivalries like this in football, basketball, swimming where we see a lot of really nice people, being really nice," she added.

"That’s great and all but it’s not my personality. I’m spunky, I’m confident and I’m not going to not be myself before a race."

King, 20, has voiced her disapproval at Efimova being allowed to compete at global level after the Russian had twice been caught using banned substances.

The spiky relationship continued in Budapest with King celebrating her world record wildly and failing to make eye contact with Efimova who had to settle for bronze.

A disbelieving Peaty became the first man to dip below 26 seconds in the 50m breaststroke a day after winning the 100m title.

By touching in 25.95 seconds, he lowered his record mark from the morning's heats by a massive 0.15 seconds.

"I was on such a high from this morning and it was so hard to ignore the fact that I did a world record and try to get myself emotionally ready," Peaty told reporters.

Kathleen Baker of the United States, the Olympic silver medallist, had to settle for the same prize as she beat Seebohm by 0.01 seconds.

The dominant force in women's distance swimming is Ledecky

It was a gruelling schedule for Ledecky who, 30 minutes later, posted the best qualifying time in the women's 200m freestyle ahead of Italy's Federica Pellegrini.

"I was just in a really good mental spot going into the 200 and i felt like I could treat it like any other race, kind of ignore the fact that I’d swum the mile and just get up and race," Ledecky said.

Earlier, Sun Yang of China came back from sixth position at the 100m mark to win his first men's 200m freestyle title at a world championships in dominant fashion.