Kiwis in the groove and unchanged for England in World Cup 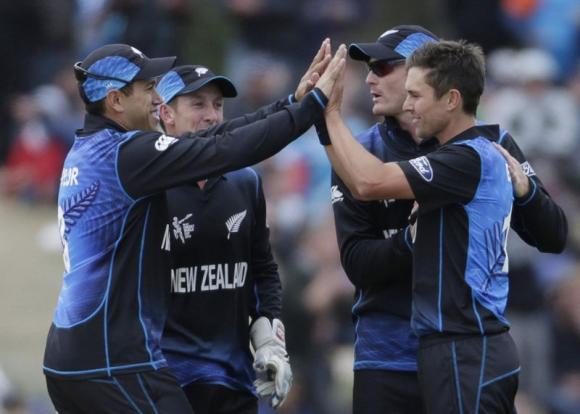 Kiwis in the groove and unchanged for England in World Cup

WELLINGTON (Reuters) - New Zealand are in something of a groove after playing a lot of one-day cricket in recent months and will face England with an unchanged side in their second World Cup match on Friday, skipper Brendan McCullum said on Thursday. The co-hosts kicked off their campaign with a three-wicket victory over Scotland on Tuesday, a win built on fine swing bowling but almost undone by a sloppy batting display. Nevertheless, McCullum had enough confidence in the XI that started the match in Dunedin to confirm the side even before hh even had a chance to look at the wicket at the Wellington Regional Stadium. "We have a full squad to pick from, and we're going to go with the same team we've played the last two games," McCullum told a news conference. "The guys have performed well so far. We want to give them the same opportunity again. We think that the balance of the team that we're going in with will suit us well on this ground." The Black Caps have won their nine of their last 11 one-day internationals in Wellington going back to 2006 and lost just two of their last 13 at all grounds. Such form has put the co-hosts among the favourites to win the World Cup but McCullum said New Zealand would not allow such tags to distract them from the task at hand. "We know that we can't get too far in front of ourselves. We're not a good enough team to do so," he said. "We need to be very respectful of that, go about our preparation and go about our work and try to execute our game plan. If we do that, that's certainly how we give ourselves our greatest opportunity." England opened their campaign with a 111-run defeat to the other co-hosts Australia in Melbourne last Saturday, giving them three more days to prepare for their second encounter. "We've been playing a lot of cricket recently, so we're probably in a little bit of a groove," McCullum said. "We knew the scheduling well before we came into it so we were able to affect that into our preparation as well. So we go on with no excuses. "We'll give ourselves a good chance, and hopefully we can replicate the form we've been playing with of late." New Zealand: Brendon McCullum (captain), Martin Guptill, Kane Williamson, Ross Taylor, Grant Elliott, Corey Anderson, Luke Ronchi, Daniel Vettori, Tim Southee, Adam Milne, Trent Boult NEW ZEALAND: Brendon McCullum, Martin Guptill, Kane Williamson, Ross Taylor, Tom Latham, Grant Elliott, Corey Anderson, Daniel Vettori, Luke Ronchi, Nathan McCullum, Kyle Mills, Tim Southee, Adam Milne, Trent Boult, Mitchell McClenaghan ENGLAND: Eoin Morgan, Moeen Ali, James Anderson, Gary Balance, Ian Bell, Ravi Bopara, Stuart Broad, Jos Buttler, Steven Finn, Alex Hales, Chris Jordan, Joe Root, James Taylor, James Tredwell, Chris Woakes New Zealand v England head to head: Total played: 77 New Zealand won 38, England won 33; tied 2; no result 4 Played at Wellington Regional Stadium: Played: 2 New Zealand won 2 Last match: June 16, 2013 England beat New Zealand by 10 runs at Cardiff