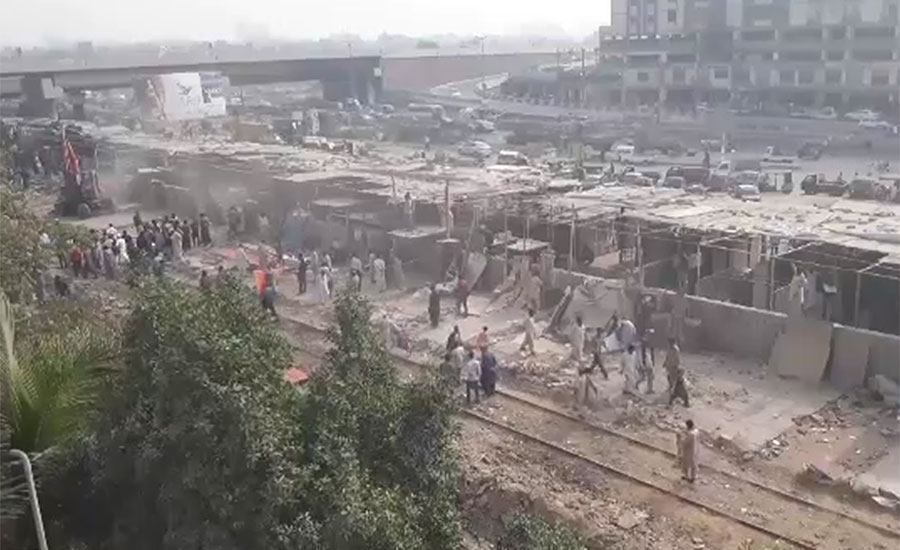 KARACHI (92 News) – The Karachi Metropolitan Corporation (KMC) have started anti-encroachment operation for removal of illegal construction from the city’s Hill Park on Friday (today). As per reports, six acres of land in Hill Park has been encroached upon. The KMC began its drive at the park Friday morning and knocked down five restaurants, two wedding halls and a mini golf club constructed on the land illegally. The KMC staff and police contingent have been deployed for the anti-encroachment operation. Illegal boundary walls, a CPLC office and a mobile company’s tower will also be demolished. The KMC has been taking action against illegal constructions across the city on the orders of the Supreme Court. It is pertinent to mention here that commercial activities and illegal businesses being run at Hill Park and other parks in the city in violation of the ruling of the Supreme Court. The Supreme Court in a ruling had ordered the city authorities to remove encroachments from Karachi including the shops and markets established on the amenity plots. Earlier, the Karachi Development Authorities (KDA) started anti-encroachment operation in Gharibabad to revive the Karachi Circular Railway (KCR) on the orders of the Supreme Court. Heavy machinery is being used to clear encroachments from the rail track, which spans over 20 stations and stretches for 43 kilometres. In the first phase, the furniture market located in Gharibabad and Liaquatabad railway track will be razed. The KDA will take steps to clear all encroachments in Gharibabad colony of Haydrabad, in surroundings of the KCR track which is included in the project. The court has given time to evacuate the shops of illegal furniture market constructed on the land of KCR.