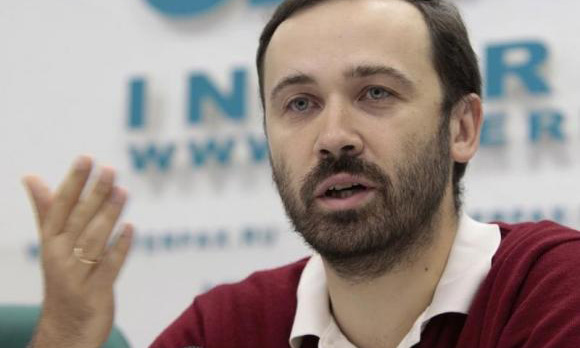 MOSCOW - Kremlin critic Ilya Ponomaryov said on Wednesday he was under pressure from state authorities not to return to Russia after reports that the country's prosecutors asked parliament to lift his immunity from prosecution as a lawmaker. Opposition members accuse the Kremlin of persecuting critics of President Vladimir Putin and say the former Soviet spy holds political responsibility for the campaign that culminated in the Feb.27 gunning down of senior opposition leader Boris Nemtsov. Nemtsov, a liberal, and the leftist Ponomaryov were among the leaders of mass street protests against Putin that swept through Moscow in 2011-2012. The killing of Nemtsov has shaken the Russian opposition, deepening a sense of despair and fear among them. Ponomaryov has fallen under increased pressure in Russia since becoming the only lawmaker in the 450-strong lower chamber of parliament, the Duma, to vote against the annexation of Crimea from Ukraine a year ago. Ponomaryov, who won a Duma seat from Russia's third-largest city of Novosibirsk, told Reuters on Wednesday Russian authorities have prevented him from returning home since August when he first went to the United States on a business trip. After he declared his intent to return in May, "they reacted by telling me not to, they are trying to keep me away from Russia," he said over the phone, adding he expected the Duma to vote in favor of revoking his immunity from prosecution, a privilege enjoyed by Russian lawmakers in general. "And then things will be kicked into the long grass, they don't want to create any more martyrs, their task is to prevent me from coming to Russia." Russian news agencies quoted a senior Duma official on Wednesday as saying the country's prosecutors have filed documents seeking to revoke Ponomaryov's immunity. Ponomaryov, a physicist and businessman, said he would decide on his next moves once he gets to know the prosecutors' case. He said his wife was also abroad but his children were staying with their grandparents in Russia. "I never wanted to emigrate, become a political refugee. I was here on a trip in August over Novosibirsk matters. I had a bag with two sweaters and that's all," said Ponomaryov, adding that he is in the United States on a tourist visa. The Russian state prosecution agency was not immediately available for comment. UKRAINE During his time in the United States, Ponomaryov has campaigned for extending Washington's sanctions imposed over Moscow's role in the turmoil in Ukraine to include more Russian state officials. "I'm skeptical on economic sanctions. They only put the Russian nation against the United States, Europe. They should target precisely the regime and its corrupt officials. Such sanctions should be as wide as possible," he said. The conflict in Ukraine has brought ties between Russia and the West to their lowest level since the Cold War and has cost Moscow dearly in economic sanctions, aggravating the country's economic woes. But Putin has also used it to whip up nationalist sentiment at home where opinion polls show his ratings are near record-highs. Before his killing, Nemtsov was working on a report his aides said would aim to prove Russia's direct military involvement in east Ukraine, something Moscow has repeatedly denied despite what the West and Kiev say is irrefutable proof. Since the street protests in late 2011 and early 2012, Putin has tightened his grip on power, leaving little room for a fractious opposition that has all but failed to challenge him during his third term. Several prominent opposition leaders, including former oil tycoon Mikhail Khodorkovsky, have fled the country, while many others, like anti-graft blogger Alexei Navalny, have faced court cases or jail. - REUTERS