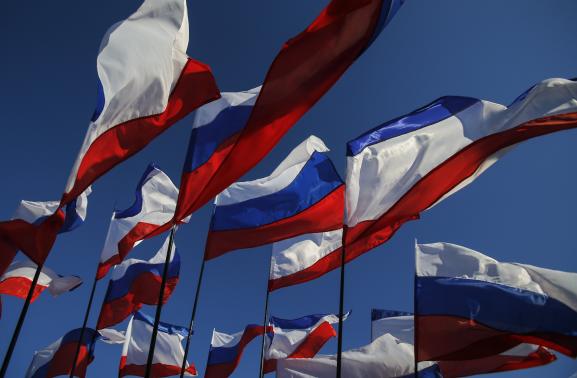 MOSCOW- Russia said on Tuesday it would not hand back Crimea to Ukraine, despite warnings by the United States and European Union that they will not drop sanctions over the Black Sea peninsula's annexation a year ago. "There is no occupation of Crimea. Crimea is a region of the Russian Federation and of course the subject of our regions is not up for discussion," Kremlin spokesman Dmitry Peskov told reporters during a conference call. Russia's parliament approved the annexation of Crimea on March 21 last year after residents of the peninsula supported the move in a referendum. Moscow has said repeatedly it will not return it to Ukraine. Russian forces had already seized control of Crimea after the overthrow of a Ukrainian president backed by Moscow, a move described by Russian officials as a coup which threatened the safety of Crimea's mainly Russian-speaking population. US State Department spokeswoman Jen Psaki said on Monday Washington would keep economic sanctions in place on Russia over the annexation as long as Crimea remains under Russian rule. EU foreign policy chief Federica Mogherini said the 28-nation bloc would stick to its policy of not recognizing the annexation, including through sanctions. President Vladimir Putin's popularity has soared since the annexation of Crimea, which was given to Ukraine by Soviet leader Nikita Khrushchev in 1954 when it was part of the Soviet Union. - Reuters