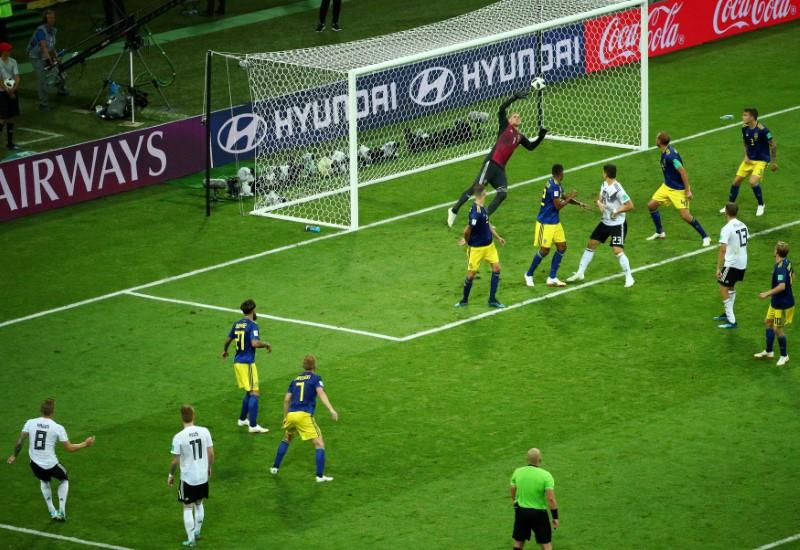 MOSCOW (Reuters) - Germany’s Toni Kroos emerged as the world champions’ natural leader , stepping up to guide them to a last-gasp 2-1 victory over Sweden kept them on course for the World Cup last 16. The charismatic midfielder, who has won four Champions League titles with Bayern Munich and Real Madrid, had long been criticised for not succeeding 2014 World Cup winners Philipp Lahm and Bastian Schweinsteiger as the national team’s talisman. He seemed more content with playing second fiddle and remaining in his creative midfield position, leaving the leading to someone else for both club and country. For Real Madrid it is Cristiano Ronaldo and captain Sergio Ramos who lead the team Kroos orchestrates and has helped to three successive European Cup victories. For his country, since Lahm and Schweinsteiger’s departure, there was no one who emerged as their natural successor  when Germany teetered on the brink of elimination. But with the score at 1-1 against Sweden the 28-year-old Kroos stepped up to take a free kick in the final seconds and with the touch of a supreme leader handed his team, playing with 10 men, a lifeline in Group F with a sublime curling shot. Kroos had earlier gifted the Swedes a goal when his back pass was intercepted. Defeat would have meant the earliest elimination for the four-times champions since 1938, and the criticism awaiting the team, who lost their opening match to Mexico, would have been massive in the soccer-mad nation. The Scandinavians, seconds before the final whistle, had the ball but attempted a weak shot at keeper Manuel Neuer instead of keeping possession. The Germans charged forward and earned a foul on the edge of the box. Kroos passed the ball short to Marco Reus, who stopped it for his team mate to curl it into the top far corner of the goal for a sensational winner deep into stoppage time. He kept Germany alive in the World Cup and established himself as the undisputed leader of the team at a time when others of his generation had failed to do so. Defender Mats Hummels was out of action with a neck injury, Jerome Boateng was sent off in the second half and Thomas Mueller did little right on the evening. Fellow World Cup winner Mesut Ozil did not even make the line-up after 26 consecutive starts at major tournaments. So it was up to Kroos to carry the hopes of Germany on his shoulders and revive their hopes of reaching the knockout stage ahead of their last group match against South Korea. He delivered when it mattered most.