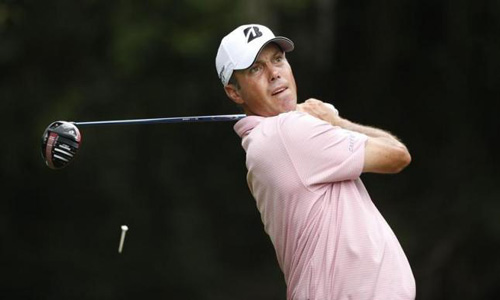 TEXAS - American Matt Kuchar ground out a level-par 72 that he described as "amazing" to share the early first-round lead at the Texas Open in San Antonio where the players struggled in gusting winds on Thursday. World number 14 Kuchar, a seven-times winner on the PGA Tour, needed "a lot of luck" as he mixed four birdies with four bogeys on the challenging layout at the TPC San Antonio to end the round level with compatriot Cameron Percy. Former world number two Jim Furyk battled to a 76 while US Open champion Martin Kaymer of Germany ballooned to an 82 in sustained winds of 30 miles per hour (48 km per hour) that gusted up to 40 mph. "I was giving it all I could on the last hole," Kuchar, 36, told Golf Channel after bogeying his final hole, the par-four ninth. "I was one under with one to go and hoping that I could bring it in under par. "But even par is still an amazing day. This was about as challenging of conditions as I can remember facing. This course is hard without wind and you've really got to drive it well. Then you throw in 30mph winds and what can happen. "It took a lot of luck for me. I had a number of things kind of go my way. I was able to hit some great shots and make a few birdies out there as well." Long-hitting American Dustin Johnson, the world number nine, carded a 78 that included five bogeys and a double. "Whether it's into the wind or down-wind, it was playing very difficult," said Johnson. "I didn't hit it very good, I didn't drive it very well so that made it even tougher. My score is terrible but I'm still not out of the mix, I guess." World number six Jordan Spieth and fellow American Zach Johnson, a twice former winner of the Texas Open, were among the day's late starters. - REUTERS