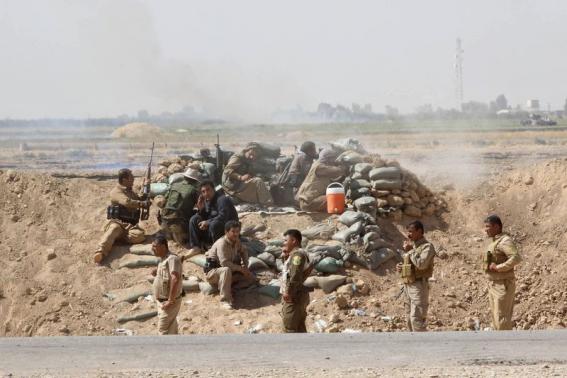 ERBIL, Iraq - Kurdish forces attacked Islamic State positions around the oil-rich city of Kirkuk in northern Iraq at dawn on Monday, backed by heavy air strikes from a U.S.-led coalition. Speaking to a local television channel near the frontline, Kirkuk governor Najmaldin Karim, who was wearing a helmet, said the purpose of the offensive was to drive militants away from the city. A Reuters reporter who went to the frontline on Monday said Kurdish peshmerga fighters were shelling Islamic State positions and had advanced on several fronts to the west of the city, seizing villages in the Mala Abdullah and Tel Ward areas. There was also heavy fighting between peshmerga and Islamic State militants in Kharabarut, northwest of Kirkuk, according to a security source in the city. The Kurds took full control of Kirkuk last August as the Iraqi army collapsed in the north and Islamic State militants overran almost a third of the country. But the city has remained vulnerable, with the frontline little more than 20 kilometers away in some places. In late January, Islamic State briefly overran Kurdish defenses around Kirkuk. Iraqi forces are currently fighting to retake the city of Tikrit from Islamic State militants in the neighboring province of Salahuddin, to the south of Kirkuk. - (Reuters)