Kurdish militant group says it was behind Istanbul bombing 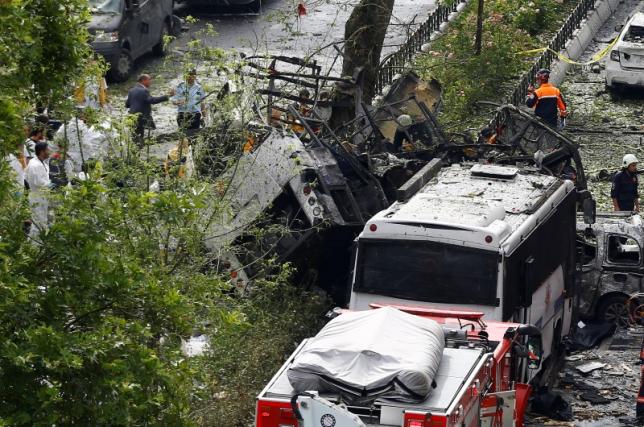 Kurdish militant group says it was behind Istanbul bombing

ISTANBUL - The Kurdistan Freedom Hawks (TAK), an offshoot of the outlawed Kurdistan Workers Party (PKK) militant group, said on Friday it carried out a suicide bombing in Turkey's biggest city Istanbul this week that killed 11 people. A car bomb ripped through a police bus in central Istanbul during the morning rush hour on Tuesday near the main tourist district, a major university and the mayor's office. TAK also warned in the statement on its website that, although it was not deliberately targeting foreigners, Turkey was no longer safe for tourists. Turkey is the world's sixth-biggest tourist destination but has seen a sharp dropoff following a spate of bombings that have killed hundreds of people in the last 12 months. Wars in neighbouring Syria and Iraq have fostered a home-grown Islamic State network blamed for a series of suicide bombings, while the PKK, which is fighting security forces in the mainly Kurdish southeast, has begun to strike in Istanbul and the capital Ankara. Separately, Turkish jets targeted and killed a group of between eight and 10 suspected PKK militants near the Iraqi border, military sources said on Friday. They said the rebels were spotted late on Thursday in the Daglica region of Hakkari, across the border from the PKK leadership's bases in the remote mountains of northern Iraq. In Van province, a firefight broke out and police killed three militants suspected of preparing for an attack, security sources said. Police raided a home in the town of Ipekyolu and ordered the suspects to surrender but were met with gunfire, they said. An air operation to find other militants continued. The Turkish government blames the autonomy-seeking PKK, classified as a terrorist organisation by Turkey, the United States and the European Union, for the deaths of more than 40,000 people, mainly Kurds, since it took up arms against the Turkish state in 1984. A peace process undertaken in late 2012 collapsed in July, and the conflict is at its deadliest since the 1990s. The government says 7,600 militants have been killed or captured, while hundreds of police officers and soldiers have been killed. Opposition parties claim between 500 and 1,000 civilians have also perished. -Reuters