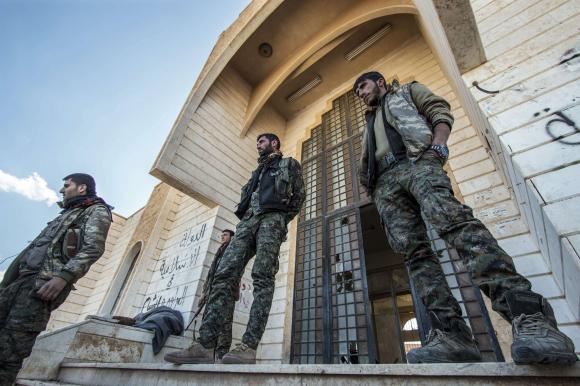 BEIRUT (Reuters) - US-led coalition jets struck Islamic State positions in northeast Syria for the second day in a row, in an area where the militants are battling Kurdish forces, a Kurdish official and a group monitoring the war said on Saturday. The Kurdish YPG militia, which has emerged as the coalition's main partner fighting Islamic State on the ground in Syria, has made significant gains in recent weeks in the north, cutting an important supply route from Iraq. Last week Islamic State appeared to try to seize back the initiative, attacking Kurdish fighters using tanks and heavy weapons close to the Turkish border. Air strikes hit areas close to the town of Tal Tamer, south of the Turkish border, overnight on Friday and on Saturday, said Redur Xelil, spokesman for the YPG. "There is fighting which continues around Tel Tamer but the coalition warplanes have targeted the area, the last strikes were a short while ago," he said by telephone. The overnight strikes were the first on the area since last month, said Rami Abdulrahman, who runs the Britain-based Syrian Observatory for Human Rights monitoring group. There were reports of casualties on both sides on Saturday, the Observatory said, without giving precise figures. Backed by Iraqi Kurdish peshmerga fighters and air strikes, the YPG defeated Islamic State in the border town of Kobani in January. The battle for Kobani was the first publicly-declared example of US-led forces closely coordinating with a ground force to battle Islamic State. The United States says it wants to train and equip non-jihadist groups to fight the militants elsewhere in Syria and the training was due to get underway in Jordan this month. It is not clear which rebel fighters it plans to train.