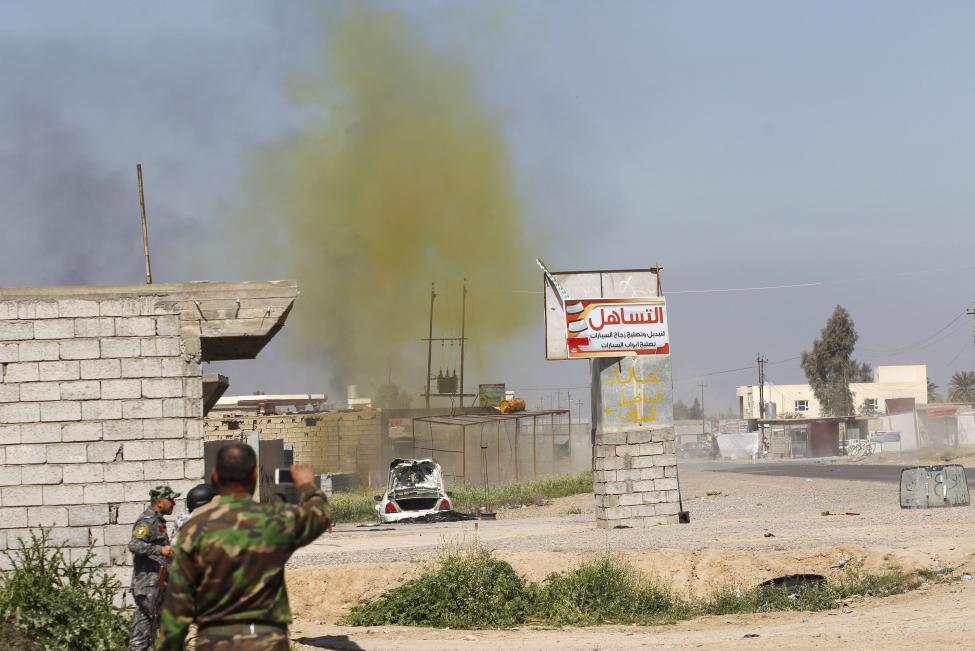 ARBIL/BAGHDAD - Iraq paused its Tikrit offensive on Monday and officials called for more air strikes against Islamic State militants, while an officer said Kurdish forces sustained two more chlorine gas attacks by insurgents. General Aziz Waisi told journalists the insurgents used chlorine twice during a January offensive west of Mosul and once in a December attack on his military police brigade in the Sinjar mountain area. One attack near Mosul, on Jan. 23, was described by Kurdish authorities on Saturday. Waisi said a number of military police - he did not say how many - were taken to hospital, where blood tests indicated they had inhaled chlorine gas released by the bombs. "When it exploded, we realized it was not a normal smoke because it caused unconsciousness and vomiting," he said. He declined to say whether samples from the two previously unreported attacks had been tested along with those from the Jan. 23 attack. The Dutch-based Organisation for the Prohibition of Chemical Weapons said over the weekend it had not had a request from Iraq to investigate claims of chemical weapons use. Iraq's Kurds were the victims of the deadliest chemical attack of modern times when Saddam Hussein's air force bombed the town of Halabja in 1988, killing at least 5,000 people. TIKRIT PAUSE In Tikrit, military officials said there was no fighting on Monday. Islamic State insurgents controlling large parts of north and west Iraq and territory in neighboring Syria have held onto central districts of Saddam's home city and have laid explosives to hold up the advancing forces. The offensive by Iraqi security forces and mainly Shi'ite militia, who entered Tikrit last week, is their largest yet against Islamic State, but it stalled on Friday. Government forces control of most of the northern Qadisiya district as well as the southern and western outskirts of the city, trapping the militants in an area bounded by a river along Tikrit's eastern edge. "We need air support from any force that can work with us against IS," Deputy Minister of Defence Ibrahim al-Lami told Reuters, declining to say whether he meant from the US-led coalition or Iran, which is playing a role in the assault. The Pentagon said it did not view the offensive in Tikrit as stalled. "Offensive operations like this have a rhythm to them," said Pentagon spokesman Army Colonel Steve Warren. "There's always going to be a requirement to regenerate combat power, to consolidate and reorganize before the next phase," he said. Warren said the US-led coalition helping Iraq had not conducted any strikes in support of operations in Tikrit. Powerful militia commander Hadi al-Amiri, head of the Shi'ite paramilitary Badr Organisation, said earlier in the offensive that militia victories before the Tikrit battle had been won without coalition air support. Interior Minister Mohammed al-Ghaban said authorities had temporarily halted the offensive in Tikrit "to reduce casualties among our heroic forces... and to preserve the remaining infrastructure." "We will choose the appropriate time to attack the enemy and liberate the area," he told journalists in Samarra, 95 kilometers (60 miles) north of Baghdad. KURDISH ADVANCE More than 20,000 troops and Iranian-backed Shi'ite militia are taking part in the operation, which began two weeks ago, supported by a relatively small contingent of Sunni fighters from Tikrit and the surrounding Salahuddin province. The assault is seen as a litmus test for plans to retake the large northern city of Mosul, which is likely to be a far more complex operation. Meanwhile, coalition air strikes helped Kurdish forces seize Wahda, Saada, and Khalid villages from Islamic State in the north and drive militants away from the oil-rich city of Kirkuk. Shi’ite Turkmen fighters also clashed for a fourth day with Islamic State insurgents near Bashir village, south of Kirkuk. In Baghdad, US presidential envoy General John Allen addressed a meeting of Iraqi and foreign officials aimed at kicking off efforts to stabilize and rebuild territories retaken from Islamic State. The militants have been driven back by Kurdish peshmerga forces in the north and Shi'ite militia known as Hashid Shaabi (Popular Mobilisation) in the eastern province of Diyala, the Baghdad belt and north of the capital. Allen said Iraqis were beginning to recover from life under Islamic State in Diyala and "hopefully soon" in Tikrit, local governance would prove difficult because many officials had been killed, were in exile or co-operated with Islamic State. Iraqi Prime Minister Haider al-Abadi's spokesman Rafid al-Jaboori echoed calls for more air strikes: "We have been saying we need more air support for all operations," he told Reuters. "We welcome air support for all our campaigns against IS". – Reuters