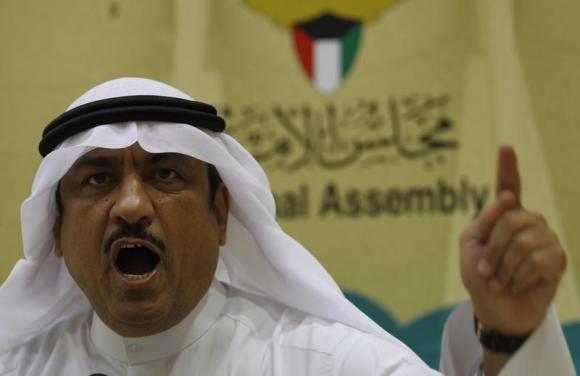 KUWAIT (Reuters) - A Kuwaiti appeals court on Sunday sentenced an opposition politician to two years in jail for insulting the country's ruler, local media reported. Defense lawyers said they intend to appeal the ruling against Musallam al-Barrak, an outspoken former member of parliament, to the highest court, news website alaan.cc said. Other news websites carried similar reports. A lower court in 2013 found Barrak guilty of insulting Sheikh Sabah al-Ahmad al-Sabah, in a 2012 speech in which he appealed to him to avoid "autocratic rule". The court sentenced him to five years in jail. Alaan.cc said security forces were deployed outside the Palace of Justice court in Kuwait City but there was no repeat of the demonstrations that accompanied the sentence in 2013. Barrak, who was at his guest house when the ruling was issued, said he was ready to turn himself in to security forces. Barrak has long been at loggerheads with the authorities over changes made in 2012 to an election law which he and other opposition politicians said were intended to prevent them taking power. Barrak had made headlines in 2012 when he addressed the emir by saying: "In the name of the nation, in the name of the people, we will not let you, your Highness, practice autocratic rule." Kuwait has avoided mass Arab Spring-style unrest but citizens held large street protests in 2012 after the emir changed the electoral law. While Kuwait allows more freedom of speech than some other Gulf Arab states, the emir has the last say in state affairs. There has been a series of political trials and authorities have revoked citizenship of some Kuwaitis in the past two years that have drawn rebuke abroad and anger at home.