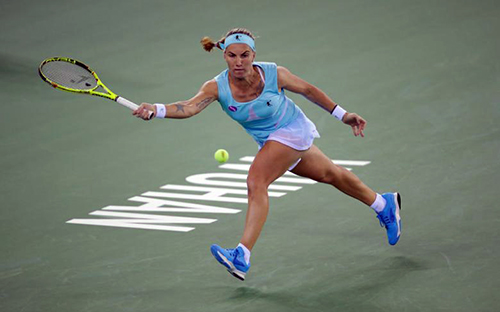 SINGAPORE – Russia's Svetlana Kuznetsova raced to a 6-2 6-1 victory over Australian Daria Gavrilova to defend her Kremlin Cup title in Moscow on Saturday and secure a place at the season-ending WTA Finals. Kuznetsova was broken in her first service game to fall 2-0 behind but the 31-year-old broke back immediately to claim the first of 10 straight games as she roared to victory in 73 minutes against the world number 37. The Russian had to win to qualify for Singapore and her victory represents heartbreak for Briton Johanna Konta, who held the final spot for the Singapore event but will now drop down to first alternate after even taking part in a glitzy draw ceremony on Friday. Kuznetsova, a twice grand slam champion, must now rush to Singapore for her first round robin match in the White Group against defending champion Agnieszka Radwanska at the Singapore Indoor Stadium on Monday. Czech Karolina Pliskova and Spanish French Open champion Garbine Muguruza are the other two players in the group. Action starts in the Red Group on Sunday when Romania's Simona Halep faces American Madison Keys before German world number one Angelique Kerber takes on Slovakia's Dominika Cibulkova. The top two players from each pool advance to the semi-finals. Kuznetsova will be making her sixth appearance at the year-ending tournament and will be looking to advance from the round robin stage for a first time.
Despite the disappointment of missing out on qualifying for the WTA Finals, Konta picked up the tour's Most Improved Player Award on Friday in recognition of her climb from 147th in the world in mid-2015 to number 10 in the latest rankings.The 25-year-old Briton also claimed her maiden WTA Tour title at the Stanford Classic in June. –Reuters