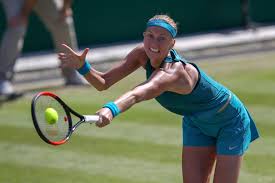 EASTBOURNE, England (Reuters) - Twice Wimbledon champion Petra Kvitova continued her sizzling streak on grass with a 7-5 6-3 defeat of Kateryna Bondarenko in her opening match at the Eastbourne championships on Tuesday.
In hot and fast conditions at Devonshire Park the Czech had too much firepower for Bondarenko as she took her winning run on grass to six having won last week’s title in Birmingham. Defending champion Kvitova reeled off the last five games to set up a meeting with long-time rival Agnieszka Radwanska to came from a set down to beat Daria Gavrilova. Home favourite Johanna Konta, seeking to rediscover the form that took her to the Wimbledon semis last year, was in dominant form against injury-hampered Aleksandra Krunic, winning 6-1 6-3. Konta will play top seed Caroline Wozniacki in round two. Last year’s French Open champion Jelena Ostapenko got back to winning ways after her first-round exit at Roland Garros in impressive style, beating world number 15 Kaia Kanepi 6-3 7-5. In the men’s event there were wins for seeded players Leonardo Mayer and Steve Johnson. Mayer, the fifth seed, beat Frenchman Gilles Simon while American seventh seed Johnson proved too sharp for Russian Daniil Medvedev. Former world number one Andy Murray, who beat Stan Wawrinka on Monday to claim a first win since returning from almost a year out with a hip injury, faces fellow Briton Kyle Edmund, the second seed, on Wednesday.