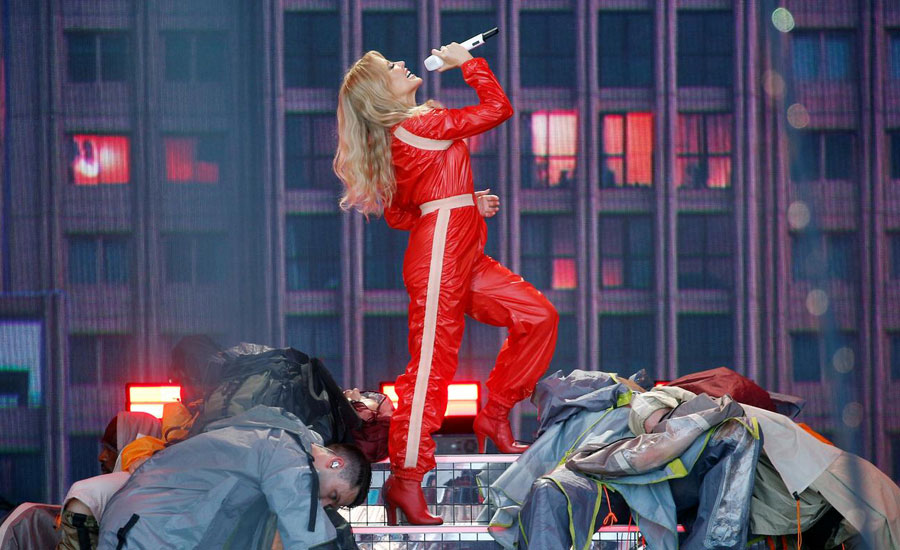 GLASTONBURY, England (Reuters) - Kylie Minogue delighted a huge crowd at Glastonbury with hits including “Spinning Around”, “Shocked” and “Better the Devil You Know”, 14 years after illness forced her to cancel a headline performance at the festival.
Kylie, as she is universally known, played all the catchy disco pop hits that the audience had come to hear, from “I Should Be So Lucky”, her breakthrough 1988 worldwide number one, to 2010 release “All the Lovers”. Minogue was due to headline Glastonbury, the world’s largest greenfield festival, in 2005, but was forced to pull out after she was diagnosed with breast cancer. “I wished things were different but life is what it is,” she said, chocking back tears of emotion. “We’re all here together in this moment.” She said some of the artists in 2005 had covered her songs, and she welcomed on stage one of them, Coldplay’s Chris Martin, to join her in performing “Can’t Get You Out of My Head”. The gig changed gear midway when the 51-year-old was joined by previous collaborator Nick Cave for the murder-themed ballad “Where the Wild Roses Grow”. But the serious interlude was brief in a show that featured a blast of rainbow Pride confetti, four costume changes, and mass singalongs from the sun-bathed capacity crowd, including for the “Spinning Around” finale. Minogue was followed by US singer Miley Cyrus, who opened with “Nothing Breaks Like a Heart”, her collaboration with Mark Ronson, who joined her on stage. Her father Billy Ray Cyrus also appeared during the show, performing “Old Town Road”, with rapper Lil Nas X. US rock band Vampire Weekend will play the main Pyramid Stage later on Sunday before British goth rock band the Cure close the festival.