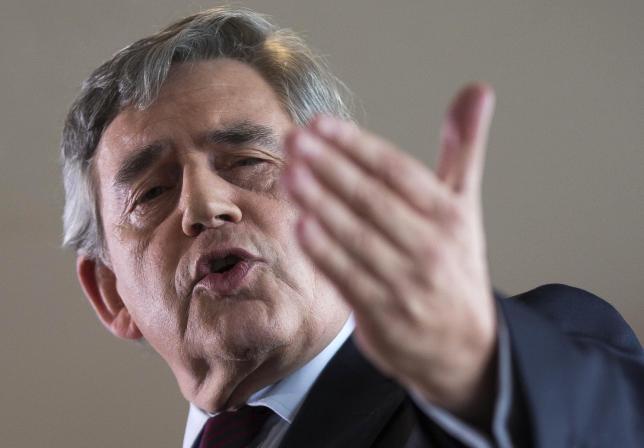 LONDON - Opposition Labour Party must choose a leader who can make it electable and not just a party of protest, former Labour Prime Minister Gordon Brown said on Sunday, after a poll found voters believe the current frontrunner would worsen its chances of winning an election. Labour, which in May suffered its worst election defeat since 1987, is the process of voting for a new leader. Opinion polls suggest left-winger Jeremy Corbyn is leading the race ahead of the result due on Sept. 12. Many supporters of Corbyn, who wants to return the party to its socialist roots, have said that by moving towards the political centre ground under three-time election winner Tony Blair, Labour sacrificed its principles in pursuit of power. Although he avoided mentioning Corbyn by name, Brown made a veiled warning to the more than 600,000 party members and supporters eligible to vote in the leadership contest that Labour would be unelectable if it chooses the veteran politician. "It is not an abandonment of principles to seek power," Brown, who was finance minister for a decade before serving as prime minister from 2007-2010, said in a speech in London. "The best way of realising our high ideals is to show that we are an alternative in government that is credible, is radical and is electable ... Protest will not be enough." Brown's intervention in the increasingly fractious leadership contest follows warnings by Blair that the party cannot win on a left-wing platform and faces annihilation if it picks Corbyn. A ComRes poll for the Independent on Sunday found 31 percent of the 2,035 members of the public surveyed believed Corbyn would worsen Labour's chances of winning in 2020, compared with 21 percent who thought he would improve it. That gave him the worst net score of all four leadership contenders. "If we cannot give people the realistic hope ... we have elected people who will ensure that there is a Labour government and will do their best to make that possible then people will walk away from us," said Brown, who quoted several former Labour leaders during a 50-minute speech delivered without notes. Brown, whose intervention during the Scottish independence referendum campaign last year was credited with helping rally his fellow Scots behind the United Kingdom, also implicitly criticised Corbyn's international policies. Corbyn has expressed sympathy with Russia over its actions in Ukraine and described members of the Palestinian group Hamas and Lebanon's Hezbollah as "friends". Britain has officially designated Hamas and the military wing of Hezbollah as terrorist organisations. "If our global alliances are going to be alliances with Hezbollah and Hamas ... and Vladimir Putin's Russia, there is absolutely no chance of building a worldwide alliance that can deal with poverty and inequality and climate change and financial instability," he said. -Reuters