Labour poised to gamble on socialism in leadership contest 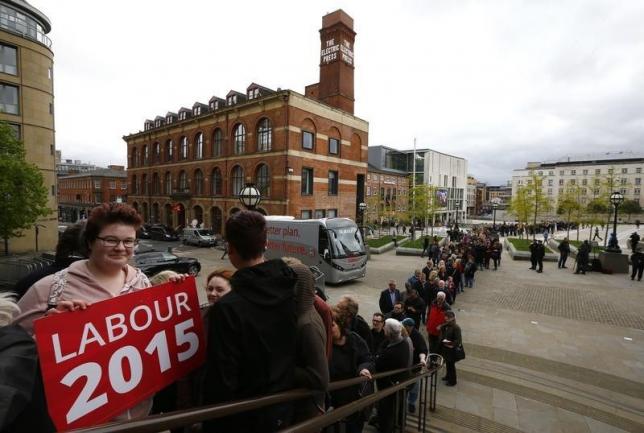 Labour poised to gamble on socialism in leadership contest

LONDON - Britain's opposition Labour Party on Friday begins voting for a new leader in a contest that polls indicate will be won by Jeremy Corbyn, a veteran fan of Karl Marx who has upstaged rivals by promising a radical shift back to the party's socialist roots. The victor will have to marshal supporters in a referendum on European Union membership and is likely to be the main challenger to Prime Minister David Cameron's Conservatives in the 2020 election. After Labour's worst election defeat since 1987 in May, four contenders are battling in a selection process characterised by Labour's most successful leader Tony Blair as a tug of war between the party's head and its heart. On one side are those who say that a left-wing outcry over the Conservative government's spending cuts shows Labour should move closer to its founding principles, rooted in the socialist and trade union movements of the early 20th century. On the other side are those who insist the party can only hope to win in 2020 if it reclaims the centre ground from which it enjoyed its most prolific election success. The winner will be announced on Sept. 12 after a ballot of more than 600,000 voters, made up of party members, affiliated trade union members and other registered supporters. Leading the left-wing charge is Corbyn, 66, whose calls for renationalisation and more government spending have thrilled party activists and Labour's trade union backers, fuelling his rise from rank outsider to bookmakers' favourite. "It's been fascinating - and exhilarating - watching this movement mushroom over the last few weeks," Corbyn said. "This campaign is about spreading a message of hope and change based on the central choice - five years or more of continued austerity, or a plan for investment and growth that stands up for the majority." Corbyn's campaign has also tapped into a frustration with Britain's political classes, who are criticised by many voters for being too carefully polished and lacking in big ideas. Usually seen in a rumpled jacket and open-necked beige shirt - complete with white vest showing underneath - Corbyn has sought to energise disillusioned voters with a promise of a radical alternative to centrist politics. Opinion polls show that as ballot papers begin arriving in email inboxes and dropping onto doormats, around half will be returned with backing for anti-war protester Corbyn, and his policies of higher taxes for businesses and the rich. "I would personally be astonished if Corbyn does not end up as Labour's leader," said Peter Kellner, president of pollsters YouGov which this week showed Corbyn commanded 53 percent of support among eligible voters. HARD-LEFT INFILTRATORS Blair, who won the 1997, 2001 and 2005 elections, has warned Labour faces annihilation if it picks Corbyn. But, supporters look set to reject a return to Blair's 'New Labour' centrist stance which embraced closer ties with business whilst increasing spending on healthcare, education and welfare. Liz Kendall, the most 'Blairite' of the candidates, lags in fourth place according to bookmakers and polls after struggling to sell her vision of a Labour that espouses fiscal discipline. Kendall told Reuters in June that Labour faced "10 years at least" out of power unless it won back the trust of voters by recognising their economic aspirations. "Any political party that wants to be elected must be trusted with people's money," she said. "Labour does not have that trust – and this must change." The prospect of a Corbyn victory has prompted warnings the party is repeating mistakes of the 1980s when a left-wing insurgency split Labour in two and set up a humiliating 1983 election defeat. Fears that the current leadership contest has been hijacked by hard-left sympathisers and rival political parties have led some Labour lawmakers to call for the vote to be suspended. This week Labour said it had disbarred 1,200 people because they had expressed support for another party, and would continue to vet new supporters taking advantage of a rule change allowing non members to pay a 3 pound fee to vote in the contest. Among the exiled voters was a mischievous lawmaker from Cameron's Conservatives - many of whose members are delighted at the prospect of a Corbyn win granting them an unopposed run at the centre-ground, which has been key to almost every post-war British election result. The remaining two candidates, Andy Burnham and Yvette Cooper, are campaigning from a more orthodox centre-left position, seeking to broaden the party's appeal. Both campaigns are based on a promise to win back voters who ditched them in May for either the perceived economic competence of Cameron's centre-right Conservatives, the surge in nationalist sentiment in Scotland or the anti-European Union appeal of the UK Independence Party (UKIP). Burnham says he is worried Labour has lost "emotional contact" with voters, while Cooper says the party needs a "progressive, modern" vision that doesn't try to ape the Conservatives' policies. Despite Corbyn's 32 percent lead over his nearest rival, Burnham, opinion does not need to shift far before other candidates have the upper hand. The rules of the contest mean that unless one candidate wins more than 50 percent of the vote, supporters' second preferences begin to be taken into account. Campaigning against candidates grouped relatively tightly in centre-left territory, Corbyn is seen as unlikely to be many voters' second choice. -Reuters