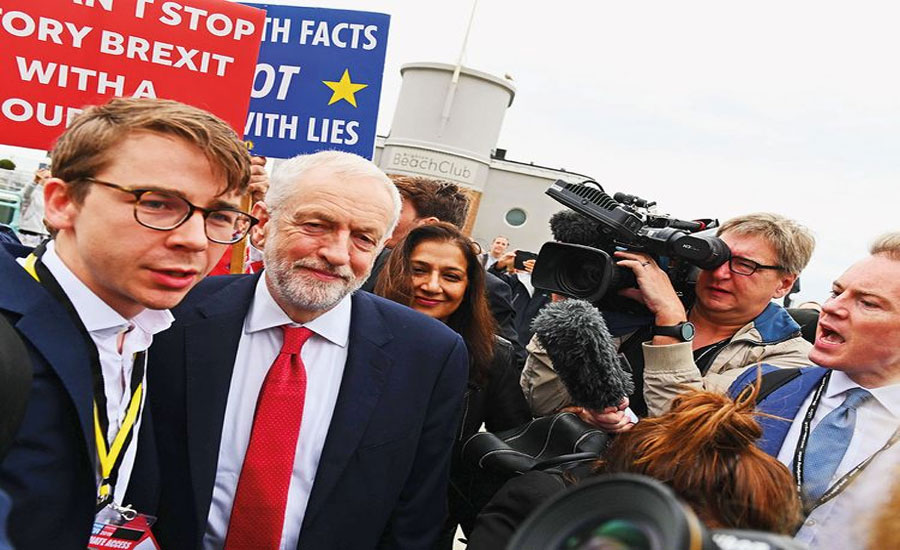 BRIGHTON, England (Reuters) - Labour leader Jeremy Corbyn said on Sunday his party would guide him on how to campaign in a second Brexit referendum, pledging to offer voters a choice between staying in the European Union and a “credible” deal. At the start of Labour’s annual conference in the English seaside resort of Brighton, Corbyn was under renewed pressure from party members and even some of his top team to unequivocally back remaining in the EU in any new vote. But so far the Labour leader, a leftist who is an instinctive critic of the EU, has struck a neutral stance, saying it was more important to hold the party together by embracing its “remainers” and those who want to leave the bloc. Just weeks before Prime Minister Boris Johnson has vowed to leave the EU “do or die”, Labour, like the governing Conservatives, is deeply divided over Brexit, increasing the uncertainty over Britain’s departure, the country’s biggest trade and foreign policy decision for more than 40 years. On the eve of a conference when party officials hoped to present Labour as a government in waiting, a new row broke out when an ally of Corbyn tried to oust deputy leader Tom Watson over Brexit. Corbyn stepped in to defuse the stand-off. He again appealed to his party to understand that while many of them wanted to remain in the EU, there was a “significant minority” that backed leaving, and so both needed to have an option if it came to a second referendum. Asked whether Labour would campaign to remain in the EU or to leave with a deal, Corbyn told the BBC he would stage a special conference to determine his party’s stance after an election which is widely expected to come before the year-end. “I am leading the party, I am proud to lead the party, I am proud of the democracy of the party and of course I will go along with whatever decision the party comes to,” Corbyn said. “We will put both views to the British people and say look this is the best deal we could get, (and) this is the remain and hopefully the reform option.” But his foreign affairs policy chief, Emily Thornberry, urged Labour to decide now its stance in a new referendum, voicing growing fears that having an unclear position on Brexit might punish Labour at an election. “It does seem to me that one way in which we will be able to help ourselves is by having a clear line on Brexit so that we can also talk about everything else,” she told a Huffington Post event at conference.

Johnson, a figurehead for the 2016 Leave campaign, has ruled out a second referendum, refusing even to countenance a further delay to Brexit and pledging to take Britain out of the bloc on Oct. 31, with or without a deal. Corbyn said his priority was making sure a no-deal Brexit would not happen after opposition lawmakers forced through legislation saying the prime minister must ask for a new extension from the EU if no deal is in place by Oct. 19. Johnson is increasingly boxed in over Brexit. This week he will face a ruling from the Supreme Court over whether he misled the Queen over suspending parliament - possibly raising the spectre of lawmakers returning to work to try to further challenge his plans to leave the EU. His foreign minister, Dominic Raab, again said the government would respect “whatever the legal ruling is from the Supreme Court, whether it’s tomorrow or later in the week”. Asked whether the government would consider suspending parliament for a second time - a move some have mooted as a way to force through Brexit on Oct. 31 - Raab said “Let’s wait and see what the first judgement decides and then we’ll understand the lie of the land.” But even with Johnson on the backfoot, Corbyn has yet to be able to paper over the rifts in his own party. The row over Watson has prompted suggestions that Corbyn’s supporters feared a possible succession could reduce the left’s control over the party. On Sunday, Corbyn was forced to say he had no plans to step down. “It’s wishful thinking by some people,” said Corbyn. “I am taking the party into the general election ... to end austerity, to bring forward policies that bring about a better standard of living and better opportunities for people all across this country. I am enjoying doing that.”