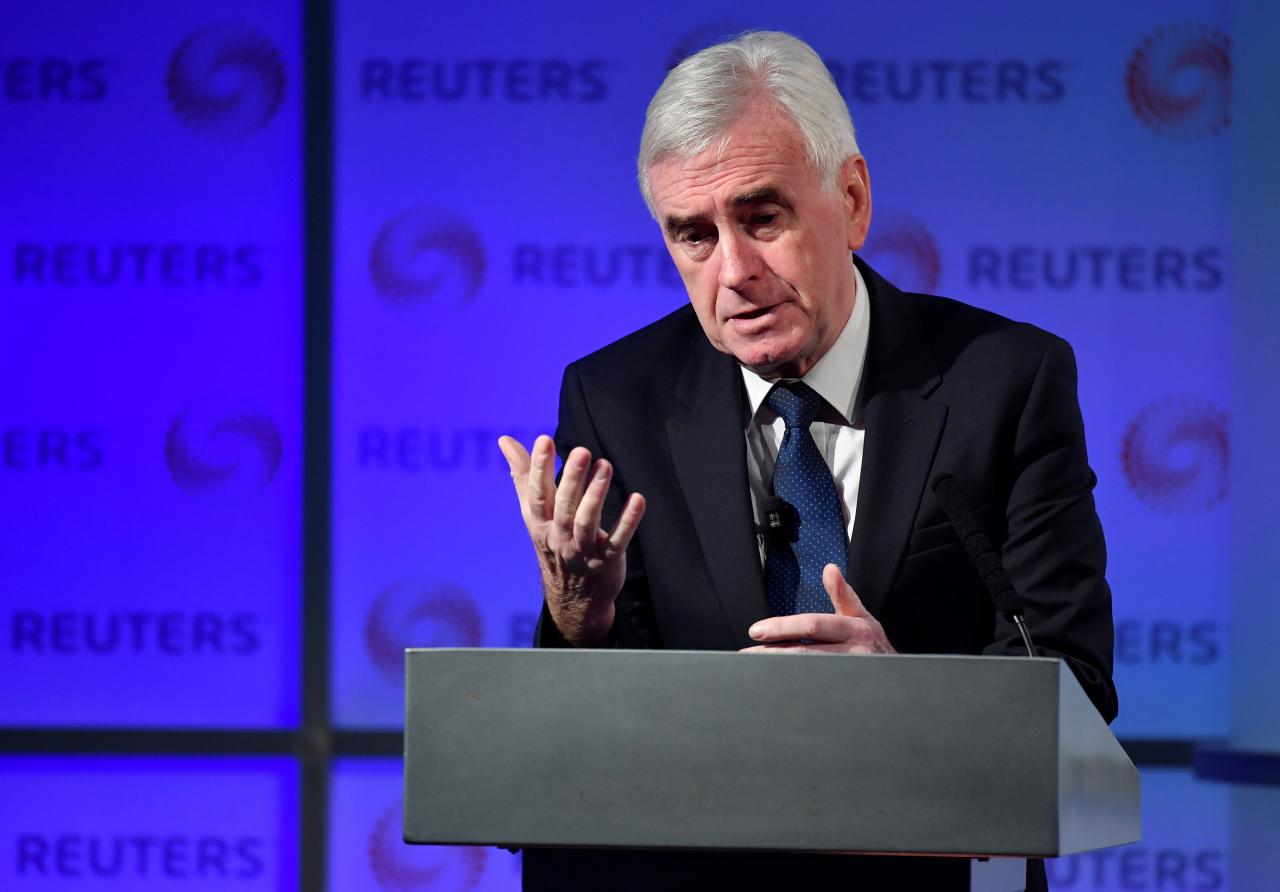 LONDON (Reuters) - British Prime Minister Theresa May’s government is in disarray over Brexit but there is no majority in parliament for damaging the economy by leaving the EU without a deal, the opposition Labour Party’s finance minister-in-waiting said on Wednesday. “We just can’t go on like this,” Labour finance chief John McDonnell, 67, said in a speech at Reuters in London. “We just cannot go on with this instability, uncertainty that there is in government, day by day and sometimes hour by hour.” Since striking a draft deal with the EU last week, May has faced the most perilous crisis of her premiership with several ministers resigning, including her Brexit minister. May has pledged to fight on, warning that toppling her risks delaying Britain’s exit from the EU or leaving without a deal, a step that could thrust the world’s fifth largest economy into the unknown. McDonnell, who along with Labour leader Jeremy Corbyn hopes to win power to build socialism in the world’s fifth largest economy, said there was not a majority in parliament for either May’s deal or for leaving the European Union without a deal. “I think an overwhelming majority oppose anything that smacks of being no deal,” he said. He said the future was deeply uncertain with options including national election or parliamentary deadlock. “Then we could be into a situation of a war of attrition within parliament of amendments to legislation taking place and uncertainty continuing,” he said. Asked about how many Labour members of parliament might rebel and vote for May’s Brexit deal, he indicated none would. “I think we’ll hold our side now. I really do, and we have done on the votes this week,” he said.

More than two years after the United Kingdom voted to leave the EU, it is still unclear how, on what terms or even if it will leave as planned on March 29, 2019. Some in the world’s preeminent financial capital are spooked by the prospect of a socialist Labour government, though McDonnell said he had no unpleasant surprises up his sleeve. “Under a Labour government, there wouldn’t be a financial crisis,” he quipped to an audience of finance executives and journalists in Canary Wharf. When asked if Labour had done enough to engage with business, he said: “No, not really”. When asked if he was a Marxist or a capitalist, McDonnell said he was a socialist but that Karl Marx had one of the best analyses of how capitalism actually works. “I’m a socialist. I’m trying to rehabilitate the reading of [Das] Kapital,” he said, giving an overview of the Labour Party’s socialist intellectual roots. “But you have to insert Marx into that as well because I think it’s one of the best analyses of how capitalism works.”