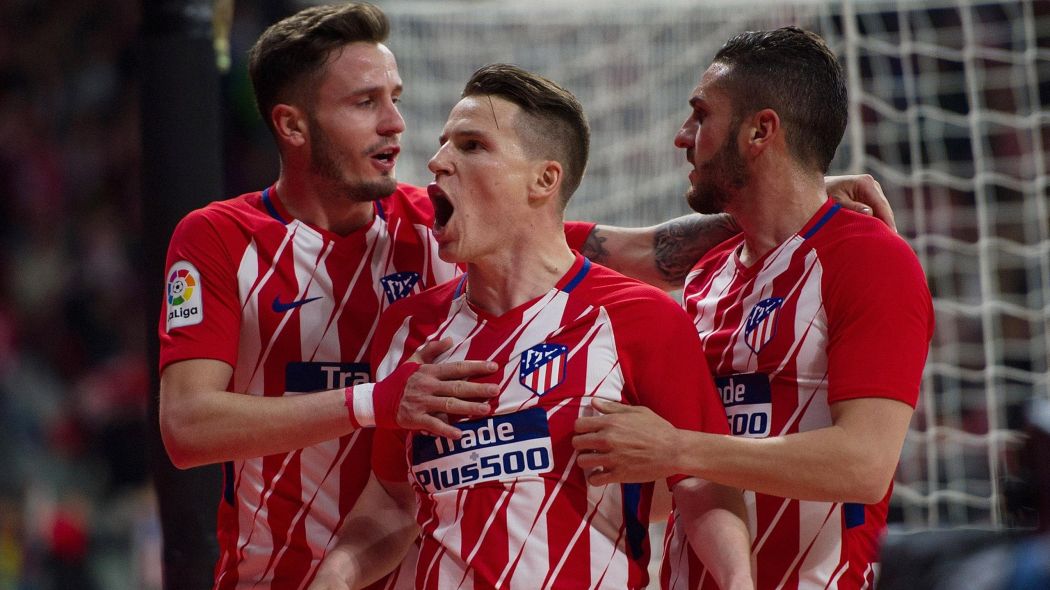 MADRID (Reuters) - Atletico Madrid beat La Liga strugglers Deportivo La Coruna 1-0 at home on Sunday without starting first choice strikers Diego Costa and Antoine Griezmann, cutting the deficit behind leaders Barcelona down to nine points. French forward Kevin Gameiro scored the only goal of the game from the penalty spot in the 34th minute in a generally underwhelming display against relegation-threatened Deportivo. The spot kick was awarded after Pedro Mosquera tugged the shirt of midfielder Saul Niguez in the area. Valencia tightened their hold on the fourth Champions League spot by winning 1-0 at Leganes and opening up a 15-point lead over fifth-placed Villarreal, who lost 1-0 at basement club Malaga as the Andalusians won a first Liga game since Dec. 10. Gameiro started on his own in attack for Atletico as top scorer Griezmann was suspended and Costa was recovering from muscle discomfort, although the Spain international came on in the second half, replacing 19-year-old debutant Carlos Isaac. Deportivo have still not managed to win in 2018 but created the better of the chances against Diego Simeone’s side. They could have taken the lead early on when forward Lucas Perez burst into the box with only Jan Oblak to beat but shot straight at the goalkeeper. Later in the half he was again thwarted by the Slovenian with a headed attempt. Mosquera wasted a great chance shortly before halftime when the ball fell to his feet at the back post but he sent it flying over the bar. In the second half, Atletico defender Lucas Hernandez made a perfectly timed challenge to swipe the ball from the feet of Perez as he was racing towards goal. Atletico coach Diego Simeone admitted his side had underperformed. “It’s always difficult after an international break so close to a World Cup and on top of that we had players suspended and injured and we responded by getting a result,” Simeone told a news conference. “Our first half was better than the second, we scored and could have taken more of our chances, but we were up against a side fighting for their lives and we couldn’t finish the game off.” Simeone’s side are second in the Liga standings on 67 points after 30 games. Leaders Barca have 76 while champions Real Madrid are third on 63. Deportivo are 19th on 20 points, eight adrift of safety and only three ahead of Malaga, who snapped a 14-match winless run by seeing off fifth-placed Villarreal with a first-half penalty by Gonzalo Castro.

Malaga are now 11 points off safety and coach Jose Gonzalez said the win had injected a new sense of hope into his side of clawing their way out of the relegation mire. “I saw our players looking at the league table. You can never lose hope,” he said. “There was a lot of despair because we couldn’t get a win but we knew that our team always competed and we are always in contention in every game.” Spain international Rodrigo broke the deadlock for Valencia at Leganes shortly after the hour mark with an arrowed drive from the edge of the area to score his 14th league goal this season. “We can touch fourth place with our fingers but it’s not assured yet,” coach Marcelino said referring to the club’s chances of securing a Champions League spot for the first time since 2015. “Each victory takes us nearer to fourth place and it would be an extraordinary achievement after two years on a downward spiral.”