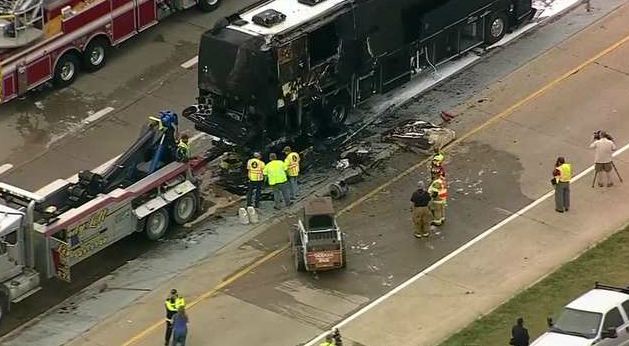 DALLAS - A tour bus carrying the lead singer of country music group Lady Antebellum caught fire on Thursday on a highway near Dallas but no one was injured. Local police in the Dallas suburb of Garland said the incident occurred on Interstate 30. Vocalist Hillary Scott posted on Twitter that she, her husband and tour manager were traveling to Dallas when one of the rear tires blew out. The driver quickly pulled over before the fire spread in the vehicle, Scott said. "Our bus tire caught on fire and we had to evacuate very quickly," Scott wrote. "Everyone is safe and sound." The other two members of the group were not aboard the bus. Lady Antebellum is nominated for vocal group of the year at the 50th annual Academy of Country Music Awards to be held on Sunday in Arlington, Texas. - REUTERS