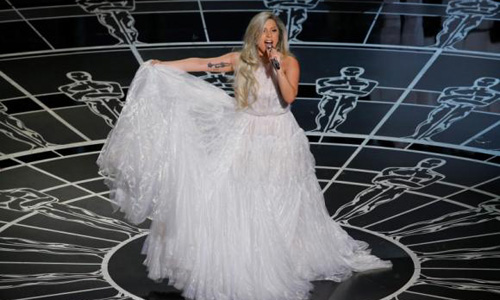 LOS ANGELES (Reuters) - There were underpants, Lego statues and a nail-biting finale on the Oscars stage on Sunday, but it was Lady Gaga's "Sound of Music" spectacular that sparked the most chatter on social media. The Oscars lit up digital platforms, with 21 million people logging 58 million interactions about the awards ceremony on Facebook Inc, according to figures from the social networking site on Monday. Lady Gaga performed a medley of hits from "The Sound of Music" and then was joined by Julie Andrews on stage for the 50th anniversary of the musical, which was talked about by 214,000 people per minute globally on Facebook, the company said. According to Nielsen Social, which monitors comments on Twitter Inc, some 60,000 tweets were posted in the minute following Lady Gaga's tribute performance as she was joined by Andrews, making it the most-tweeted moment of the night. With 129,000 mentions, Lady Gaga was also the celebrity who garnered the most chatter on Twitter. About 13 million people viewed 5.9 million tweets in the United States about the Oscars on Sunday night. Show highlights included host Neil Patrick Harris wearing just his underpants on stage in an homage to a scene from "Birdman," the audience receiving Lego Oscar statues during the "Everything Is Awesome" performance from "The Lego Movie" and John Travolta's apology to Idina Menzel for flubbing her name at last year's ceremony. On Instagram, it was Oscars presenter Ansel Elgort's photo with his mother as his date to the ceremony that earned the most "likes" - more than 733,000. The Oscars, aired live on Walt Disney Co's ABC, saw a sharp dip in viewership, with 36.6 million people in the United States tuning in to see frontrunners "Birdman" and "Boyhood" battle it out for the night's best picture prize. "Birdman" won, while "Boyhood" was shut out of the major categories.