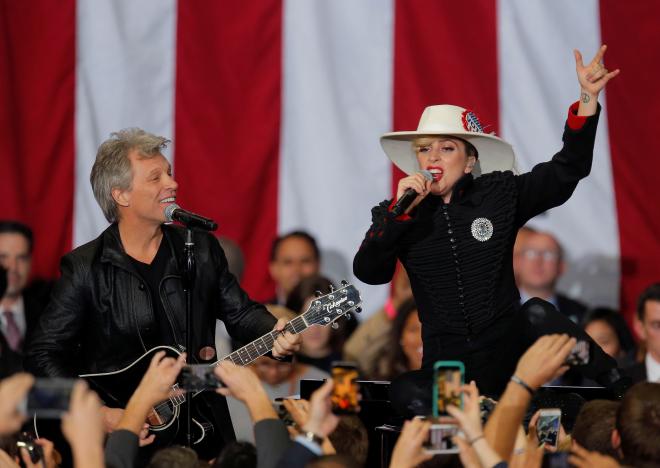 NEW YORK – Lady Gaga called for kindness, Miley Cyrus was in tears, Madonna vowed never to give up and Katy Perry urged Americans not to weep as Republican Donald Trump stunned the world by defeating heavily favored Democrat Hillary Clinton in Tuesday's U.S. presidential election. Celebrities, many of whom had campaigned for Clinton, were shocked as Trump was elected after a long and bitter campaign. A tearful Cyrus posted a video on social media on Wednesday saying she had not slept because of Clinton's loss. But the "Wrecking Ball" singer, 23, who had said earlier this year she would leave the country if Trump won, urged unity, saying "Donald Trump, I accept you as President of the United States ... Please treat people with compassion and respect." Lady Gaga went to Trump Tower in Manhattan early on Wednesday and posted a picture of herself on Instagram holding a "Love trumps hate" campaign poster. "I want to live in a #CountryOfKindness #LoveTrumpsHate. He divided us so carelessly. Let's take care now of each other,"she wrote. Hollywood actors, comedians and filmmakers had thrown their support behind Clinton. According to the Center for Responsive Politics, entertainment sources contributed $22 million to her campaign and to pro-Clinton super-PACs through Oct. 19, compared with less than $290,000 for Donald Trump, Hollywood trade publication Variety reported this week. Cher, who had said earlier in the campaign that she would move to Jupiter if Trump was elected, tweeted "World will never be the same. I feel sad for the young." She made no mention of moving out of the United States. Perry, who performed for Clinton at several campaign rallies, said "Do not sit still. Do not weep. MOVE. We are not a nation that will let HATE lead us." "A New Fire Is Lit. We Never Give Up. We never Give In," wrote Madonna on Twitter. "Harry Potter" author J.K. Rowling, who is British, got into a Twitter spat after urging her followers to challenge "racism, misogyny and hatred." But Trump too had his showbusiness supporters. "CONGRATULATIONS PRESIDENT TRUMP! @realDonaldTrump against all odds ..against the establishment and even against most from the GOP..U did it!," tweeted former "Cheers" actress Kirstie Alley. Actor Stephen Baldwin, the brother of "Saturday Night Live" star Alec Baldwin, tweeted that he was "proud to have been part of such amazing history." –Reuters